County Department of Health Trained Over 9,000 Residents, Saved Over 3,000 Lives Since Inception of Pilot Program. 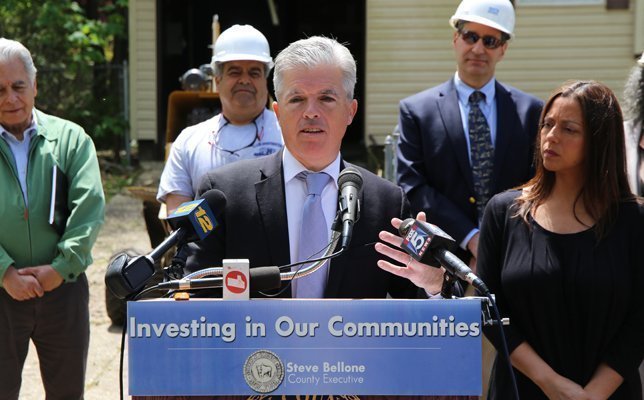 Suffolk County, NY - July 20, 2017 - Suffolk County Executive Steve Bellone today announced an upcoming Opioid Overdose Prevention Class in commemoration of the fifth anniversary of the rollout of Suffolk County Department of Health’s Opioid Overdose Prevention Project. The training, which meets New York State Department of Health requirements, will enable participants to recognize an opioid overdose, administer intranasal Narcan and take additional steps while Emergency Medical Service teams are in transit. Participants will receive a certificate of completion and an emergency resuscitation kit that includes the nasal Narcan.
The class is scheduled for Monday, July 31st, at 6:00PM at the William J. Lindsay County Complex, Building C016, Hauppauge NY, 11788. Interested participants can RSVP by calling the Suffolk County Health Department’s Office of Health Education at 631-853-4017. Class size is limited.
“During the early days of my administration, Suffolk County was selected as one of only four localities in New York State to take part in the Regional EMS Opioid Overdose Prevention pilot project. The EMS pilot was so successful that we petitioned New York State to allow us to train laypeople how to recognize an opioid overdose and administer intranasal Narcan to save lives. This has proven to be an integral part of our multifaceted approach to dealing with the opioid epidemic,” said County Executive Bellone. “As we commemorate the fifth anniversary of the Opioid Overdose Prevention Project, I am proud of how far we have come and the thousands of lives that have been saved by our EMS Technicians, law enforcement officers, and incredible residents who recognize the epidemic and chose to help make a difference.”
Naloxone, or Narcan as it is known, is administered to reverse the effects of an opioid overdose with minimal side effects. Prior to the 2012 demonstration project, Narcan could be administered at the scene of an emergency by only Advanced Emergency Medical Services providers, either intravenously or by injection.
“The Opioid Overdose Prevention Project has enabled us to save thousands of lives while we work with colleagues at all levels of government and community services to address this nationwide epidemic on a local level,” said Dr. James Tomarken, Suffolk Commissioner of Health Services.
Since its inception in 2012, the Suffolk County Department of Health Services’ Division of Emergency Medical Services has held over 278 classes and trained more than 9,000 individuals to recognize an opioid overdose and administer Narcan. In those five years, Narcan reversals have saved more than 3,000 lives.
Those who have been trained include Suffolk County’s 5,000 EMTs; police officers; staff in Suffolk County’s crime lab; domestic violence shelters; jail medical unit; veterans and youth enrichment services as well as probation officers;  sheriffs;  guards; corrections officers; town and village police; town public safety officers; parks personnel; substance abuse nurses, faculty, staff, and administrators; mobile community crisis action teams; school district faculty and staff; and the general population, including opioid users, their families and friends.
In 2016, the Suffolk County health department began partnering with local hospitals to identify patients who are at risk of opioid overdose, and provide them and their families with naloxone kits, while educating them about overdose risk factors and the signs and symptoms of an opioid overdose.
According to Robert Delagi, Director of Suffolk County Emergency Medical Services, Suffolk County EMTs reversed 325 opioid overdoses using naloxone in 2012, the first year of the pilot program. The number of opioid overdose reversals increased over the years, with 475 lives saved in 2013, 493 lives saved in 2014, 542 lives saved in 2015 and 681 lives saved in 2016. This year, Director Delagi expects to surpass that number, as there have already been 429 naloxone reversals from January 1 to June 15, 2017.
“We encourage residents to use the resources that the county and its partners are providing,” said Dr. Gregson Pigott, EMS Medical Director and Clinical Director of the Opioid Overdose Prevention Program. “Be proactive, save the hotline numbers on your cell, watch the videos we’ve provided, get trained and become involved in your community.”
Suffolk County has approached the opioid epidemic on multiple levels, working with lawmakers, medical providers, medical prescribers, parents, school districts, law enforcement, local agencies, and community partners.
AnnMarie Csorny, Director of Community Mental Hygiene Services, said,  “Our division contracts with 10 prevention providers who are active in 37 local school districts.  Division prevention staff support the efforts of the local community coalitions, and train teens and parents in prevention strategies.  The division operates four methadone clinics, a medication assisted treatment education program at our correctional facilities, and provides onsite treatment and linkages to services in preparation for release.”
In addition, Suffolk County, with the Long Island Council on Alcoholism and Drug Dependence (LICADD), operates a 24/7 Substance Abuse Hotline (631-979-1700) for individuals in crisis and their family members. Since inception in April 2016, the hotline has received 1217 incoming calls through May 31, 2017.
Suffolk County hosts on its website a Substance Abuse Resource Center, featuring powerful videos, a directory of substance abuse prevention, treatment and recovery services, and a listing of available opioid overdose treatment classes, some of which include the “Ugly Truth,” a program for parents, conducted by the Suffolk County Medical Examiner, Police Department, and Department of Health’s Division of Community Mental Hygiene.