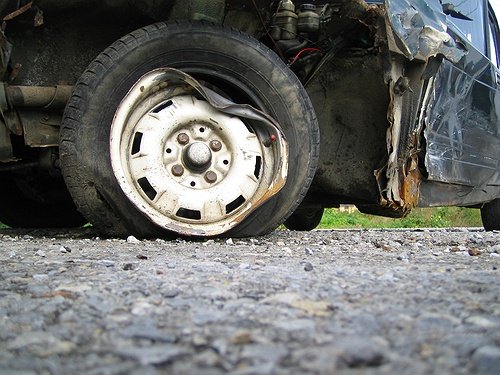 Long Island, NY - January 7, 2015 - Attorney General Eric T. Schneiderman today announced the arrests of five individuals for their alleged roles staging automobile accidents in Nassau and Suffolk counties to fraudulently receive insurance payouts. The defendants, including alleged ringleader Jean Guilberto, are charged with participating in a series of staged accidents in which rented U-Haul trucks were intentionally crashed into cars loaded with participants, who were then directed to be treated for fictitious injuries at a medical clinic in Freeport. As a result of the three allegedly fake accidents and falsely reported injuries, the defendants are also charged with submitting fraudulent insurance claims, totaling more than $100,000. The defendants are charged on three indictments with multiple felonies, including Insurance Fraud in the Third Degree (a class D felony), Grand Larceny in the Third Degree (a class D felony), and Falsifying Business Records in the First Degree (a class E felony). If convicted, Guilberto faces as much as 21 years in prison.

“Insurance fraud costs all New Yorkers and my office will hold those who seek to scam our insurance and medical systems accountable,”Attorney General Schneiderman said. “Breaking up staged automobile accident rings means safer streets and safer communities. It also means a fairer market for consumers whose insurance premiums skyrocket as a result of this kind of fraud.”

The defendants, who were arrested and arraigned today, are charged with conspiring to create three staged accidents, between October 2010 and June 2011, in order to fraudulently bill insurance carriers and collect illegal payouts. According to statements made by the prosecutor at arraignment, the defendants rented U-Haul trucks and then intentionally drove them into cars operated by other participants. The accidents were allegedly organized by Guilberto, who allegedly recruited the U-Haul drivers and the occupants of the second vehicle with promises of cash payments or lucrative personal injury settlements. After they staged the accidents, the defendants allegedly lied to the responding police officers and pretended that the accident had been real.

Also according to statements made by the prosecutor at arraignments, the occupants of the cars struck by the U-Hauls were directed by Guilberto to Freeport Medical, P.C., located at 50 South Main Street in Freeport, NY. At Freeport Medical, these defendants allegedly filled out insurance forms that included false information about the accident and the defendants’ purported soft tissue injuries. Based on the fraudulent claims of injury, Freeport Medical billed insurance carriers over $25,000 for each accident and over $100,000 in total.

In New York State, a person injured in a motor vehicle accident is automatically covered by the Comprehensive Motor Vehicle Insurance Reparations Act, commonly referred to as the No-Fault law. No-Fault insurance carriers are required to provide reimbursement for a wide range of medical and health services for injuries related to car accidents, up to $50,000 per person.

In addition to medical coverage, a victim in a motor vehicle accident may be eligible to recover money from an insurance carrier for a bodily injury lawsuit stemming from injuries resulting from the accident.

The following defendants are charged in the indictments:

The investigation was handled by Investigators Adrian Klapper and Kevin McCann. The Auto Insurance Fraud Unit is led by Deputy Chief Leonard D’Alessandro and Supervising Investigators Edward Keegan and Natalie Shirfin. The Investigations Bureau is led by Chief Dominick Zarrella.