Statue of Liberty Reopens for 4th of July

Months after Superstorm Sandy dealt a heavy blow to Liberty Island, the Statue of Liberty is once again open for public visitors. 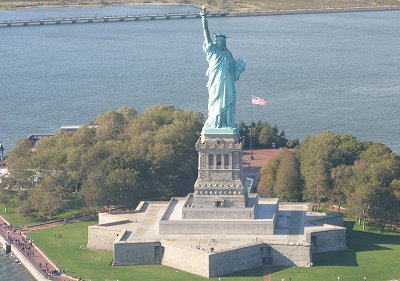 As Long Islanders and people across the country get ready to celebrate the nation’s most patriotic of holidays, a symbol of American freedom that has stood for well over a century is reopening to the public.

When Hurricane Sandy struck the region, a great deal of damage was done to Liberty Island. Though Lady Liberty herself was unharmed, three quarters of the island were submerged in the superstorm, resulting in heavy losses of utilities and power systems, a backup generator, and security systems. Docks and brick pathways were ripped apart, making it difficult to access the island and traverse it once there.

Damage to Liberty Island was immense—initial estimates placed the cost of repair around $60 million—but not irreversible. On March 19th it was announced that plans were underway to have the statue reopened to the public by July 4th, and now that Independence Day is here those plans have proven successful; the Statue and Liberty Island are up and running once more.

Those who intend to visit the island and walk up to the statue’s crown will need to bear several factors in mind. Tickets to the crown must be reserved in advance, and only four reservations may be made with a single order; the names of all attendees must be provided at the time of reservation and tickets are not transferable. Children must be accompanied by an adult at all times, and those under 4 feet tall may not climb higher than the pedestal.

Once at the statue, only ferry tickets, necessary medications, and a single camera per person may be carried up the stairs (lockers are available to store other personal belongings). Many will find the climb to the top physically taxing—there are 377 steps from base to crown—and there is no elevator, but the view from the top is rewardingly breathtaking.

The trek to the top of the Statue of Liberty may not be particularly easy, but remains a worthwhile experience for residents and tourists alike. Lady Liberty has long stood a proud symbol of American freedom and now takes on a mantle of perseverance as she showcases the region’s enduring Sandy-recovery efforts.