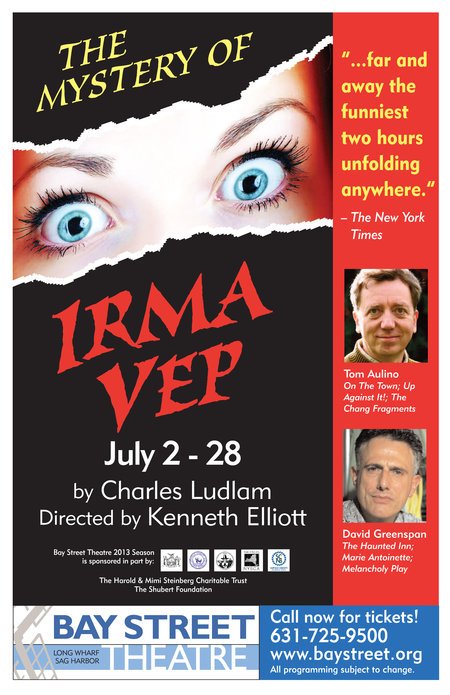 Sag Harbor, NY – June 14th, 2013 – Bay Street Theatre presents THE MYSTERY OF IRMA VEP, written by Charles Ludlam and directed by Kenneth Elliott, as the second production in its 2013 summer Mainstage season following the hysterical comedy, LEND ME A TENOR playing through June 23. THE MYSTERY OF IRMA VEP runs July 2 – 28 and stars Tom Aulino and 5 time Obie Award winning actor David Greenspan. Tickets are $59.50 and $69.50 with subscriptions to all 3 Mainstage productions starting at $138. For more information call the Box Office at 631-725-9500 or buy online at www.baystreet.org. July 2 will be a “Pay What You Can” performance with a limited number of tickets available on that date after 2 pm at the Bay Street Theatre Box Office. Please note that due to the fireworks display in Sag Harbor, the July 6 performance will be at 7 pm.

“Irma Vep is going to be a funny show! We are incredible happy to have both Tom and David as a two man cast playing eight different characters with over 35 different costume changes,” says Gary Hygom, Producer for Bay Street Theatre. “Under Elliott’s direction, Vep will have audiences crying with laughter.”

THE MYSTERY OF IRMA VEP was first produced by Ludlam's Ridiculous Theatrical Company, opening off-off-Broadway in New York City's Greenwich Village in September 1984 and closing in April 1986. It starred Ludlam as Lady Enid, the new mistress of the manor, and a butler, and Everett Quinton as Lord Edgar Hillcrest, the master of the manor, and the housekeeper (among other characters). The "Cast and Crew" won a Special Drama Desk Award. Ludlam and Quinton won the 1985 Obie Award for Ensemble Performance.

The show was later produced off-Broadway at the Westside Theatre from September 1998 through July 1999, with Quinton and Stephen DeRosa. The production won the 1999 Lucille Lortel Award for Outstanding Revival, along with Outer Critics Circle Award nominations for Outstanding Revival of a Play, Outstanding Lighting Design (John Lee Beatty), and Outstanding Costume Design (William Ivey Long).

In 1991, THE MYSTERY OF IRMA VEP was the most produced play in the United States, and in 2003, it became the longest-running play ever produced in Brazil.

THE MYSTERY OF IRMA VEP is a satire of several theatrical and film genres, including Victorian melodrama, farce and the Alfred Hitchcock film Rebecca (1940). The play is written for two actors who, between them, play eight characters of both sexes.

KENNETH ELLIOTT has directed off-Broadway plays and musicals at such theatres as the Public, Primary Stages, Manhattan Theatre Club and the WPA Theatre. He co-authored and directed Devil Boys from Beyond, which received the “Outstanding Play” award at the 2009 New York International Fringe Festival and transferred to New World Stages in 2010. He is best known for his long collaboration with Charles Busch, having directed (and sometimes appeared in) the original productions of Mr. Busch’s plays from Vampire Lesbians of Sodom to You Should Be So Lucky. He also directed revivals of Mart Crowley’s The Boys in the Band in New York and the West End of London. Regional credits include The Asolo Theatre Center, Cincinnati Playhouse-in-the-Park, Cleveland Play House, Denver Center, Wilma Theatre, and the Cape Playhouse. He is associate professor of theatre and chair of the Fine Arts Department at Rutgers University in Camden.

CHARLES LUDLAM (1943-1987) was a multi-talented, off-the-wall and out-of-the-closet actor, playwright, director, and producer whose Ridiculous Theatrical Company broke boundaries and helped define the avant-garde Off-Off-Broadway movement. He was born in New York and educated at Hofstra University. He first acted professionally in New York in 1967, and later that year he founded his own troupe and was busy for the next twenty years, the company going from obscurity to campy cult interest to citywide admiration. Ludlam and his longtime companion Everett Quinton usually played the leading roles of either male or female in his outrageous spoofs, although as time went by he employed less camp and more of a highly theatrical style. His Marguerite Gautier in Camille (1974) was perhaps the role most identified with Ludlam, and his play THE MYSTERY OF IRMA VEP (1984) is his most revived in theatres across the country.

Both Tom Aulino and David Greenspan will be familiar faces to the New York theatre going audiences as the two man cast of THE MYSTERY OF IRMA VEP.

Tom Aulino’s New York credits include the Broadway revival of On The Town as well as Marvin’s Room (Playwrights Horizons), Up Against It!, The Chang Fragments (Public Theatre) Measure for Measure and Henry VIII (Delacorte), Sin (Second Stage) and UBU (Lincoln Center). He recently performed in Mary Zimmerman’s production of Candide in Chicago, Washington D.C. and Boston. Other Chicago credits include The Winter’s Tale and She Always Said, Pablo (Goodman), The Dresser, Valparaiso (Steppenwolf), Take Me Out (Joseph Jefferson Award) and Theatre District (Steppenwolf/About Face Theatres). At Kansas City Rep he performed in Circle Mirror Transformation and directed their production of THE MYSTERY OF IRMA VEP last fall. He was an original member of Charles Busch and Ken Elliott’s Theatre-In-Limbo, appearing in the cult classics, Vampire Lesbians of Sodom, Sleeping Beauty or Coma, Pardon My Inquisition, Theodora She-Bitch of Byzantium and Times Square Angel. He is Assistant Professor of Theatre at Auburn University.

David Greenspan is the recipient of 5 Obie Awards including the lifetime achievement award whose recent credits include The Haunted Inn (Target Margin), Marie Antoinette (A.R.T/Yale Rep), Melancholy Play (13P); two performance Obies: one for Terrence McNally’s Some Men and Goethe’s Faust, one for Mart Crowley's The Boys in the Band (dir. Kenneth Elliott); solo renditions of Barry Conners’ The Patsy and Gertrude Stein’s lecture, Plays, and his own plays, most notably Dead Mother at the Public, She Stoops to Comedy (Obie) and Go Back to Where You Are at Playwrights Horizons, The Argument (Obie) with Target Margin, The Myopia with The Foundry and Coraline (w/Stephin Merritt) at MCC. Obie for Sustained Achievement.

The 2013 Mainstage Season concludes with A Funny Thing Happened on the Way to the Forum (August 6 – September 1) based on the book by Burt Shevelove and Larry Gelbart; music and lyrics by Stephen Sondheim; with Musical Director Ethyl Will; Directed and Choreographed by Marcia Milgrom Dodge. Buy a subscription to all 3 Mainstage productions this summer starting at $138! Call the Box Office at 631-725-9500 or buy online at www.baystreet.org