Take the Train to the Belmont Stakes

Forget the hassle of highway driving and take MTA Long Island Rail Road to the 147th running of the Belmont Stakes this Saturday, June 6. 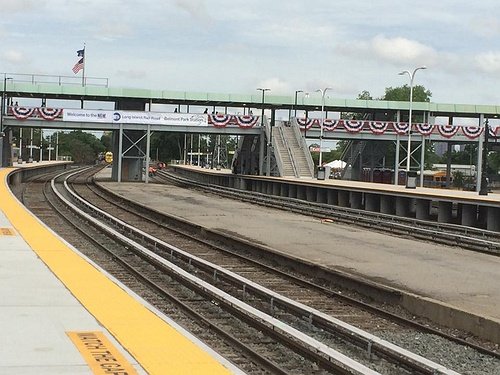 The LIRR remains the best bet for travel to beautiful Belmont Park. With frequent service from Penn Station, Atlantic Terminal in Brooklyn and Jamaica to a newly refurbished Belmont Park Station, there is no faster or more convenient way to see American Pharoah’s bid to become the first winner of thoroughbred racing's Triple Crown in nearly four decades.

Today, LIRR President Patrick A. Nowakowski officially reopened Belmont Park Station, showing off more than $5 million in infrastructure improvements, including new, 10-car high, train level platforms, new staircases and lighting. Until now, Belmont Park Station was the only remaining LIRR station with ground level platforms. It could accommodate only 8-car trains and was not wheelchair accessible. The project includes new directional way-finding signs and a new public address system to replace the bullhorn announcements employed in prior years. A new ramp has been constructed to provide platform access for mobility impaired-customers.

10 Car Trains to Carry 25% More Customers
The LIRR is also promising improved service over previous years in moving customers in and out of Belmont Park Station before and after the big race. The new platforms will accommodate 10-car trains which will carry about 25% more customers than before. These improvements coupled with a new, innovative plan for moving trains in and out of the station will enable the LIRR to better serve the large number of horse racing enthusiasts who will be using the Railroad to get to and from the track this year.

“After last year, we promised to make things better,” said Nowakowski. “I challenged my team to redesign and rebuild this service in time for the 2015 Belmont Stakes and to assume this year’s Belmont would be another Triple Crown affair. They did it, reconstructing the entire station and redesigning the post-race operation plan despite a very difficult winter. Under the direction of John Kettell, the LIRR’s Engineer of Structures, the people who do the heavy lifting on this railroad got the job done. They deserve the credit and they make me proud to lead this organization.”

New Service Plan
While the design, demolition and reconstruction continued apace, Nowakowski and his transportation team devised a new service plan to speed trains in and out of Belmont Park Station, where, until now, inbound and outbound trains shared one track leading to Jamaica Station. To better handle the surge of fans leaving en masse after the Belmont Stakes, the LIRR will position empty trains along one track of the nearby Hempstead Branch, using a connecting spur to move them into Belmont Park Station for loading at the same time that fully loaded are leaving for Jamaica.

In prior years, the Railroad used only the west leg of the track configuration known as the Belmont Wye, which allowed just one train in or out of the station at a time, requiring trains to await track space to enter and exit Belmont. As a result of this improvement, which employs both east and west legs of the Wye, regular Hempstead Branch service will be reduced from hourly to every two hours from 3 p.m. until about 10 p.m. on Belmont Stakes Day. Still, Nowakowski said it will not be possible to transport everyone from Belmont at the same time and the wait is still likely to take two hours or more.

“We are working hard to do better,” he added. “All we can we request of customers is their understanding and patience.”

The renewal of Belmont Park Station, which was completed in just five months, was buttressed by a $1 million investment by the New York Racing Association (NYRA) to restore the covered bridge that connects the station to the racetrack. The LIRR’s investment was $4 million.

Christopher Kay, CEO and President of the New York State Racing Association said, “For nearly a year, the New York Racing Association and the Long Island Rail Road have worked together in a true collaborative partnership for all fans traveling to beautiful Belmont Park. Today, the seeds of those efforts stand in full bloom, with the opening of this new, modernized Belmont Station. I would like to personally recognize and thank President Patrick Nowakowski, as well as all of the men and women who tirelessly worked to make today’s grand opening possible.”

Eastbound
The Railroad has scheduled 18 extra trains to Belmont on Saturday, with 16 departing from Penn Station providing a 33 minute, one-seat ride to Belmont Park, including a stop in Jamaica. Two Belmont trains will originate in Jamaica. The first train departs Penn at 9:39 a.m. and the last at 4:32 p.m. Customers starting at Atlantic Terminal in Brooklyn or traveling west from Nassau or Suffolk must change at Jamaica to catch a Belmont train.

Westbound
Trains will begin departing Belmont Park Station at 4:16 p.m. with subsequent departures at 4:51 p.m., 5:10 p.m. and 5:51 p.m. After the Stakes race, trains will depart approximately every 15 minutes and continue until Belmont Park closes. Again customers heading home via Atlantic Terminal, Brooklyn or traveling east must change at Jamaica to complete their journey

Stay at the Track for Goo Goo Dolls Concert
To avoid the inconvenience of battling a mass exodus of fans all heading to the exits at the conclusion of the Belmont Stakes, the LIRR and NYRA urge fans to avoid the post-Stakes crush by staying at the track to enjoy the remainder of the racing card as well as the Goo Goo Dolls concert scheduled to follow.

NYRA Expects Event to be Sold Out
Tickets to the racetrack must be purchased prior to the event. The New York Racing Association has announced a cap of 90,000 tickets and fully expects a sellout. NYRA will not be selling any tickets at the gate on Saturday. Anyone taking the LIRR must have a Belmont Park ticket to get into the race track.

Buy Round Trip Tickets in Advance
The trip is even easier when customers purchase their special round-trip Belmont train ticket in advance. Only Belmont Park train tickets will be accepted for train service to and from Belmont Park. First race post time on Saturday is 11:35 a.m. The 147th running of the Belmont Stakes is set for 6:50 p.m. with many hoping American Pharoah becomes the first horse to win the Triple Crown since 1978.

Round-trip fares from Long Island with transfer at Jamaica:

• LIRR tickets will NOT be sold aboard trains.

• Only Belmont rail tickets will be accepted for train service to and from Belmont Park.

Alcohol Banned Aboard LIRR & At Belmont Park
On Stakes day, the MTA Police will be enforcing a no alcohol policy on trains to Belmont Park, Bags and coolers are subject to search before being allowed on Belmont Park trains at Penn Station, Atlantic Terminal or Jamaica Station. Also, Belmont Park is enforcing its own alcohol ban. No alcoholic beverages of any kind can be brought into the Belmont Park facility. The restriction regarding alcohol has been enacted in the interest of patron safety and in an attempt to make sure that people drink responsibly.

Accessibility
Belmont Station is now accessible for the physically challenged who may use the new wheelchair ramp at the east end of Belmont Park Station. However, there are no escalators or elevators.

NYRA Security Policies
In addition to its alcohol ban, NYRA has issued other restrictions, including:

• No purses larger than 12 inches in diameter

• No umbrellas, non-folding or folding furniture

• No cameras with detachable lenses, tripods or lenses more than 6 inches in length.

• No drones or radio-controlled aircraft

For More Information
Again, customers can go to www.mta.info/lirr to find the LIRR’s Belmont Stakes Train Service brochure and the Belmont Stakes Train Service timetable. Customers can also call 511, the State Travel Information Line. The hearing impaired can use their preferred relay service provider for the free 711 relay to reach the LIRR at 511.