By Christian Abbatecola Published: May 03 2014

Investigators believe they have found the piece of rail responsible for the F train's derailment. 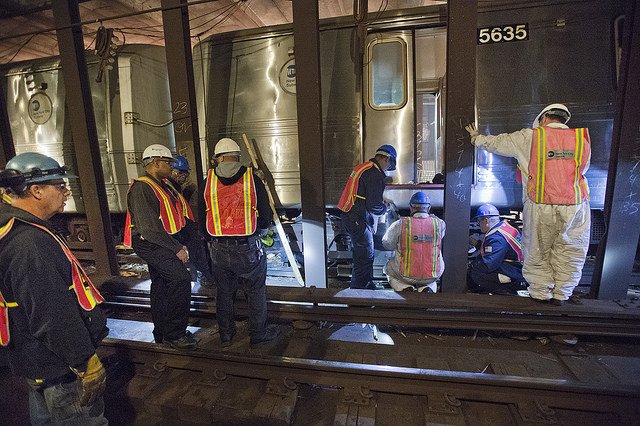 Update – 12:00 PM – The MTA has announced that service for the E and F trains along the Queens Boulevard line is expected to resume at 1:00 PM today. Work to repair the tracks will extend into early Monday with a  goal of restoring full normal service before the morning rush hour.

The section of rail believes responsible for the derailment has been identified, and is believed to have been manufactured in the US in November 2013, and installed in March 2014. The rail is being sent for metallurgical testing as part of the investigation.

Original Story – May 3, 2014 – 11:30 AM – A train derailment that occurred yesterday morning at approximately 10:24 AM has left 19 people injured, 15 of whom were deemed to have sustained only minor injuries.

According to the MTA, the southbound F train was on the express track of the 65 St R & M station on the Queens Boulevard line when its middle six cars went off the rails; the first and the last cars stayed on the track, and the middle six remained upright even after becoming dislodged. New York City firemen and police officers were called in to evacuate the roughly 1,000 passengers on the train through an emergency exit—a process which took about two hours.

An investigation is currently underway to determine what caused the derailment, but at this time little is known.

“The focus originally was on caring for the injured and the safe evacuation of our customers. The Fire and Police Departments did an excellent job in this effort.” said MTA Chairman and CEO Thomas Prendergast. “The focus is now on a full and thorough investigation of this incident. After the rush hour we will focus on re-railing the cars, inspecting and repairing damage and then restoring service when everything has been determined to be safe.”

As the investigation and repairs continue, the MTA has employed a variety of busses and alternative routes to help accommodate passengers. The E, F, M, and R trains were all impacted by the derailment, and the MTA issued an advisory that customers should take the 7 and J trains as alternatives. Previously scheduled weekend construction work on the M, 7, and J lines was cancelled to better accommodate travelers.

Information about delays and service changes along the LIRR and NYC transit can be found here.