County Executive announces the promotion of the first Black female sergeant in the department’s history. 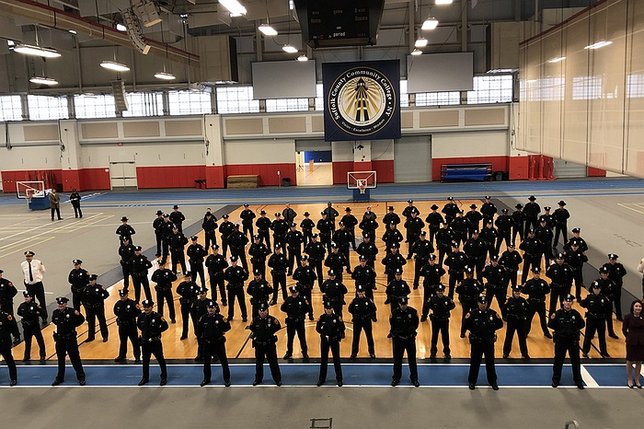 Suffolk County Executive Steve Bellone has announced the promotion of 25 SCPD officers and detectives to the rank of Sergeant as they complete their four week Police Supervision training at the Suffolk Police Academy. Among the various promotions is the first black female sergeant, Apryl Hargrove, in the Police Department’s History. The promotions will fill long time vacancies in the department, which will help ensure greater oversight of patrol officers, and are the first set of promotions following the County’s historic Police Reform and Reinvention Plan.
“The officers being promoted today are taking another well-earned and important step in their law enforcement careers,” said Suffolk County Executive Bellone. “We have been working incredibly hard to help ensure diversity within the ranks of the SCPD, and today we reach another major milestone with the promotion of the first black female sergeant in department history. Our goal is now to ensure that is the norm, as we work to promote and recruit additional officers in the future.”
Suffolk County Police Department Acting Commissioner Stuart Cameron, said: “This is a well-deserved opportunity for these officers and detectives who have received exceptional training to lead officers in the day-to-day operations of the department. Being a supervisor can be challenging, but these individuals have proven they possess the skills necessary to perform at the highest standards. I have the upmost confidence in these new Sergeants, as we move forward implementing the police reform plan.”
James Gruenfelder, President, Suffolk County Superior Officers Association, said: “This is excellent news for our Department, the residents of Suffolk County and our newest Sergeants who are eager to serve the public in their new roles as first line supervisors.”
The 25 Police Officers who are being promoted to the rank of sergeant just completed the New York State Division of Criminal Justice Services’ course in Police Supervision, which was held at the Suffolk County Police Academy. The course, which is 4 weeks long, began on May 3 and concluded on Friday, May 28. The promoted officers are given instruction in the following subjects: Professional Communications, Hate Crimes, Implicit Bias, Use of Force, Ethics, Incident Command, Serving the limited English-proficient community, as well as SCPD policies and procedures and Felony Investigations.
The new sergeants have an average of 11 years’ experience, with individual officers ranging from 5 years on the job to 28 years on the job. Additionally, 8 officers have prior military experience, including Major Apryl Hargrove, who is a 20 year US Army Veteran.
With 16 percent of the individuals being promoted to the rank of sergeant individuals of color, the promotions reflect the County’s ongoing efforts to ensure diversity within all ranks of the Police Department. Out of the 25 officers being promoted to sergeant, 20 are white males, one is a black female, one is a white female, two are Hispanic males, and one officer identifies as multiracial.
Prior to the promotions, the last class of sergeants was promoted in March of 2020, and was comprised of 17 white males, two white females, and one Hispanic female. The SCPD Sergeant’s Examination was given in June of 2019, with the list becoming active in November of 2019.  There were 190 Police Officers who passed the Sergeant’s examination
Those being promoted include:
Earlier this year, County Executive Bellone swore in a new police class with the highest percentage of minorities in department history. Of the 104 recruits, 28% were minorities and ten of the recruits are fluent Spanish speakers.
In December 2018, Suffolk County launched an extensive outreach campaign focusing on promoting diversity within the recruitment applicant pool so that it is reflective of the communities that the police department serves. The campaign included social media, PSAs, and advertisements, grass roots outreach to community leaders, working with outside organizations such as the NAACP and Urban League, and connecting with local churches.