An emu escaped from its Lindenhurst home and was killed during Suffolk County Police's attempt to rescue the 250 pound bird. 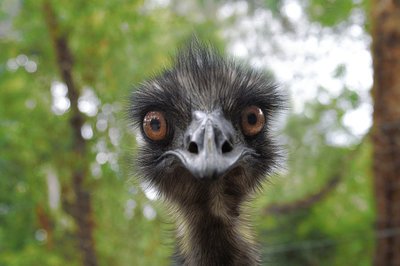 An emu escaped from a Lindenhurst yard Monday and was killed during a police rescue when the bird made its way to water. The bird belonged to Steve Weinkselbaum of Lindenhurst. Weinkselbaum was in the Dominican Republic at the time of its escape. His son, Stephen Weinkselbaum, who was still at home, was awakened by neighbors and told the bird had gotten out. According to the youngest Weinkselbaum, the gates were locked and he wasn’t sure how it escaped.

The Emu is native to Australia and is the second largest bird in terms of height. Despite their huge frames, Emus have no problem swimming. The bird has long legs and a long neck like an ostrich. Its top speed maxes out at 31 mph. An Emu’s legs are incredibly strong and can easily rip through wire. The bird mates between May and June and during their mating season, the animal can be overzealous. The owners said the bird is peaceful so it currently being the bird's natural mating season  may or may not have to do with the escape.

The emu made its way from the Weinkselbaum’s Lindenhurst home on Santa Barbara Road to East Riviera Drive in Copiague. The bird escaped in the morning at 10:50 AM. As it was running down the streets authorities were notified that an Ostrich was on the loose.

When police found the bird they cornered it. In their attempts to corner the Emu, the 250 pound bird fell in water. While in the water, Suffolk County police wrapped its neck around a catch pole. In the video taken of the police rescue, the bird’s head hit against a nearby boat as the catch pole and a yellow rope tugged on its long neck as they tried to bring it back to shore. The bird, simply named Emu, was killed during the aquatic rescue mission. Police Chief Roy Gross said it was legal for the Weinkselbaum’s to own the Australian bird.