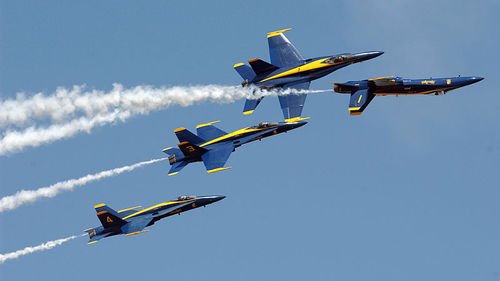 The 11th Anniversary Bethpage Air Show at Jones Beach is just a month away and thousands of locals will crowd the beach to watch the annual Air Show not only to mark the unofficial start of summer but also in celebration of Memorial Day.

"Our performances provide a unique opportunity to inspire millions to connect with and support our service members, and we are looking forward to an exciting 2014 season," Blue Angels' commanding officer and flight leader Commander Thomas Frosch said in a statement.

Other military performances include those from the U.S. Army Golden Knights, USMC MV-22 Osprey and the U.S. NAVY Parachute Team “The Leap Frogs.”

Some of the civilian performers include the Geico Skytypers, Sean Tucker, Misty Blues All Women Skydiving Team, David Windmiller, the Warbirds, Carl Skinner and many others. This year’s show will also be the first for John Klatt Airshows Screamin’ Sasquatch - a Jet Waco styled plane powered by two different engines.

The Air Show will run on Saturday, May 24th and Sunday, May 25th from 10 AM to 3 PM. Admission for the show is free to the public but visitors will be charged $10 per vehicle for parking. However, those who carry the NYS Empire Passport will enjoy a free entry into the beach. The passport allows for unlimited access to New York State parks, beaches and recreational facilities.

If you’re planning on attending this year’s Air Show at Jones Beach, check out some of these tips that will help you have fun but also stay safe: