Schumer Announces that Air Force Will Spend $1.2M for Environmental Review Of Site – the First Significant Progress on BAE Site Demolition; Next Step Is Securing Full Funding for Building’s Demolition – Must Be a ... 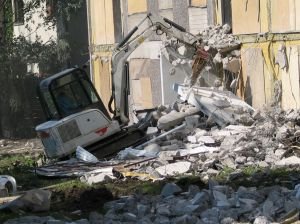 New York, NY - March 24, 2014 - Today, at the vacant BAE Systems Site in the Town of Union, U.S. Senator Charles E. Schumer announced that the Air Force has committed $1.2 million to conduct an environmental assessment of the site, the first major step in the demolition of the former BAE site. Now that the environmental assessment is on track, Schumer is urging the Air Force to prioritize the demolition of the former BAE site and will fight for federal funds in the Fiscal Year 2015 Air Force budget to complete the project, which is estimated to cost $17.3 million. Schumer said the funding for the environmental assessment was made available to the U.S. Army Corps of Engineers (USACE) last month, funding is expected to be awarded this month to begin the assessment and the study is expected to conclude in roughly six months. In order to speed up the timeline for the demolition, Schumer is now urging the Air Force to prioritize the next step in the process and designate funds in their Operations and Maintenance budget for the demolition of the BAE site, which is an eyesore, a drag on local finances, and a hindrance to redevelopment efforts in the Town of Union.

“Ridding the Town of Union of the vacant BAE site must be a high-priority federal project because right now, the property is eroding nearby property values and impeding redevelopment. Razing the building will remove a black mark on the neighborhood, remove an environmental hazard, and create a new economic opportunity not only for the Town of Union, but for all of Broome County,” said Schumer.

Schumer continued, “The Air Force’s commitment to fund an environmental assessment of the blighted BAE site is the first major step in the eventual demolition of the property, and is welcome news for the Town of Union, and Broome County which has been waiting for years to see some signs of real progress,” said Schumer. “But we can’t rest on our laurels; the Air Force must prioritize the former BAE site for demolition now that this study is getting underway, because it’s just too much of a drag on the local economy to let it continue to sit there unoccupied. So I’ll be holding their feet to the fire, urging them to fund this work through the Air Force’s Operations and Maintenance pot, and start work on this demolition as soon as possible.”

Schumer today announced that the Air Force has awarded $1.2 million to the Huntsville District Office of the USACE in February for the Detailed Environmental Baseline Assessment of the former BAE Systems site, the first step in the demolition process. An RFP for the work should be available by the end of March, at which point the assessment can begin. The study will determine potential environmental hazards in the process of demolition, such as the presence of heavy metals or other hazardous materials. The assessment will take approximately six months to complete.

The Air Force funds the demolition of sites from its Operations and Maintenance budget, and determines which projects to move forward on each year depending on the availability of funds and the importance of the project. Therefore, Schumer is now urging the Air Force to prioritize the BAE Systems site in Union for demolition in their FY2015 budgeting, so that the Air Force is ready to move on the project soon after the environmental assessment is complete. Schumer argued that the BAE demolition should be prioritized because of the significant negative impacts it has had on the community. The local Industrial Development Agency (IDA) continues to pay approximately $14,000 per month in maintenance and upkeep costs to keep the building safe and secure, and the building is a drag on nearby property values. Furthermore, it is a potential environmental hazard and a roadblock to redevelopment. Schumer said he would fight for more funds for the Air Force’s Operations and Maintenance budget to increase the chances that the BAE demolition project can move forward. The total demolition costs are estimated to be $18.5 million, which includes the $1.2 million for the environmental assessment.

Schumer was joined by community members and a representative from the local Industrial Development Agency (IDA), which holds the contract fordeed on the property and is paying maintenance and security costs to keep the shuttered building secure until demolition begins. Since Tropical Storm Lee severely flooded the former BAE Systems site in 2011 to the point of inhabitability, Schumer has fought to keep BAE and its 1,350 jobs in the Southern Tier. Once the jobs were safe, Schumer has focused on ensuring the federal government honors its commitment to handle the shut-down and demolition of the vacant property, which is owned by the Air Force. Most recently, in November, Schumer called on the Air Force to step up and release a firm timeline for the demolition of the vacant BAE Systems site in Westover in the Town of Union so the community can save on maintenance costs and begin the process of redevelopment.