Editorial: The Status Of the Old Inlet Breach

The breach at Old Inlet isn't an easy issue to tackle, however; one-sided meetings are not the way to go in determining action. 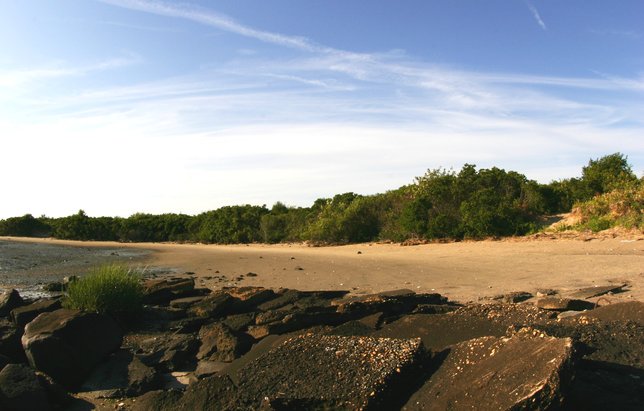 Yesterday, a meeting was held to discuss the science behind the Old Inlet breach caused by Hurricane Sandy. The meeting was billed as being an event that will focus on all sides of the argument, whether or not the breach should or should not be closed. Unfortunately, this was not the case. While everyone on Long Island wants cleaner water, the purpose of this meeting, as outlined by moderator Thomas Schultz was to provide an open forum for all sides of the argument. In the end, the event was little more than a pro-environment, pro-breach rally with little regard for those with an opposing opinion.

The event started off with immediate disappointment in that the Superintendent of Fire Island National Seashore (FINS) wasn't present. Christopher Soller of FINS released a prepared statement discussing the importance of barrier islands like Fire Island, as well as an update on the breach at Old Inlet. Now five months after Hurricane Sandy, the slow-crawl of the bureaucratic process is truly dumbfounding. Damage dealt due to a hurricane that made landfall five months ago should have been dealt with almost immediately, yet regions of Long Island are still limping along, post-Sandy.

There are two sides to the Old Inlet issue. One is that the breach (lovingly dubbed “New Inlet”) has begun flushing out the bay area, delivering clean water to a once heavily-polluted spot. The other side of the issue is potential flooding and property damages caused by the breach, though there isn’t a tremendous amount of research to support that side of thing. What's the impact on the shoreline? Is it a bad thing for salt water to enter the bay? Superintendent Soller's statement outlined just what progress (read: not much) has been made in handling the breach at Old Inlet.

Soller illustrates in his missive that the Breach Contingency Plan (BCP) calls for a minimum of 45 days of monitoring before it is determined that it should be sealed. 45 days is far less than five months. Under constant monitor by National Park Staff utilizing the latest in mapping-grade GPS technology, the breach at Old Inlet remains an open wound along Long Island's south shore. The most disturbing thing about this BCP is that it was developed in 1997. The fact that such an important piece of legislature hasn't been revised in over a decade is troubling, indeed.

What's the answer, then? Kevin McAllister, president of Peconic Baykeeper discussed how much the water around Long Island has changed. How eel grass and clams aren't able to survive in our waters. "We have thousands of acres of shellfish grounds that are closed due to impaired waters," McAllister said, adding "we're at a stage where nutrients and brown water issues are major polluting problems. Storm water runoff, septic seepage. Enormous costs, enormous problems. With this breach, the bay-ocean exchange, we haven't even seen the benefits of this new inlet. Let's wait until August when you look down and see your feet in clear water instead of brown, chocolate-colored surf."

McAllister also mentioned that individuals should start to recede from oceanfront homes. What's the point of living on an island if one can't choose a beautiful, waterfront home and be afforded the protection of local government and legislation? "We have a silver lining here, in the wake of a devastating storm, we need to come together as one voice and reach out to our elected officials to put a hold on utilizing the Army corp. of engineers." McAllister also illustrated an incident in the 1960's where the Army corp. of engineers' developments in Florida led to the pollution of Lake Okeechobee. This comparison was met with thunderous applause. What's curious is why McAlliser failed to mention any instance in which the Army corp. of engineers succeeded in aiding a coastal region. Surely there's been an instance of success since the 1960's McAllister could have mentioned?

Expectations are that the Inlet will close naturally this summer. While this is far from certainty, FINS, the National Park Service and the other organizations involved are monitoring the situation closely. The impact on water quality and on local municipalities has yet to be determined, though there are plenty of individuals who are seeing the return of wildlife and plant life that hasn’t existed in the area in decades.

Five months post-Sandy to monitor the situation has resulted in very little. The breach has shifted. It's not closing. Natural closure is expected to occur, but there's no guarantee that this will happen. Professor Charlie Flagg of Stony Brook University stated "every time a storm comes through, the channel changes." Flagg did a brilliant job in illustrating exactly how the breach developed, as well as discussing in laymen's terms the factors pertaining to what causes such a breach to occur, in terms of salinity and sea level elevation.

The most interesting part of the meeting was, after a slew of individuals came out in favor of leaving the breach open, Blue Point resident Stephen Capitano took to the microphone to simply discuss the damage “New Inlet” continues to do to his home. “Sunday, March tenth. Check the weather, it was a beautiful, sunny day. No winds. The tide was across the street, representing about seventy feet beyond where it would be on any day like that. I would have to put on boots to get to my front door. The water level was about twelve inches deep,” said Capitano, who has paid about three thousand dollars to help shoreline recovery near his home. That three thousand dollar sand investment was later washed out to sea two weeks later. “I was only allowed to put in sand, that’s all the DEC and DEEP would allow me to do. So, I replaced the sand. I figured I’d get a couple years out of it. Literally, two weeks later, gone.”

Save The Great South Bay has done a fantastic job of getting the word out about the development of the breach at Old Inlet. Regardless of what side you fall upon, the science speaks for itself: changes are caused every time a storm comes through. Change can be bad or it can be good. The inlet itself is only about eight feet deep, however; it has continued to shift and destroy portions of the area including the boardwalk area.

The breaches in both Cupsogue County Park and Smith Point County Park have been closed. The New York State Department of Environmental Conservation, in the end, are the ones who can make the decision as to the closing of the breach. The sentiment, at current time seems to be "let's wait and see." While it's easy to get caught up in the pro-environment rhetoric bandied about by McAllister, perhaps a wait-and-see approach truly is what's required? But what happens when wait-and-see is trumped by the next superstorm?

The best case scenario here is that Long Island recovers and suddenly becomes the fishing powerhouse and clean-water paradise Billy Joel used to sing about. Not a lofty ideal, of course, but the recovery of the Great South Bay isn't something that will occur after one summer season. The return of Long Island's shellfish and clamming industry would certainly be a silver lining in the aftermath of Hurricane Sandy, as would the return of the ecosystem that hasn't been strong in over 20 years.

“I’m glad they had this meeting, I’m glad people got to say what they needed to say, personally, I want clean water, too. But, they keep talking about no costs,” Capitano said. “I’m not the only house being flooded on a regular basis. There is a cost and it’s pretty high.”