The longer these breaches are left unrepaired, the larger they will become, which will result in them being more expensive and difficult to repair.

At least three large breaches have occurred to our barrier beaches during Hurricane Sandy’s onslaught. 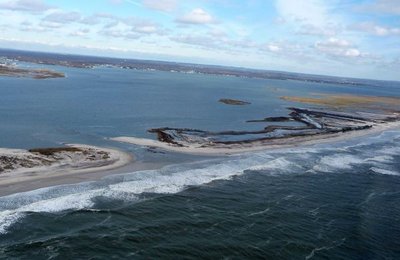 The largest, a 1000 foot wide breach, located at Cupsogue County Park on the western tip of Dune Road in Westhampton and a 50 yard breach at the eastern side of Fire Island, in Smith Point County Park, are on the fast track for repair with the help of the DEC and the Army Corp of Engineers.

The estimate to dredge these areas and repair the two breaches has come in at $7.25 million, with 60% of the funding coming from the federal government and the rest from New York (65%)and Suffolk County (35%). Repairs are expected to begin on Monday, November 19, 2012.

The third breach is located in the 8 mile long federal reserve area known as the “Old Inlet“ at the Otis Pike High Dune Wilderness Area. This area is being carefully watched, but plans to repair this breach have not yet been announced.

The longer these breaches are left unrepaired, the larger they will become, which will result in them being more expensive and difficult to repair. "The Park Service has this ideological view that they should just let the natural process go," Schumer said at a news conference. "I'll take this to whatever level I have to, to get this done."  Suffolk County Executive Steve Bellone has also joined in calling for the breach to be closed.

Concerns of an increased flood hazard to the previously protected bay area homes and businesses, include exposure to ocean  tides, storm surges and increased potential for damage during the winter storm season are being taken very seriously by Commissioner Joe Martens as well as local area state and governmental representatives.

"Hurricane Sandy caused catastrophic damage to the barrier beaches of Long Island," Commissioner Martens said. "With the help of the Army Corps, we are taking the first step to fix those breaches. The state is prepared to allocate funds as quickly as possible through the New York Works program to protect the bay communities, infrastructure and habitat."