The Islanders, Rangers, and Knicks all played Canadian teams this week, resulting in only 1 win out of 5 games. 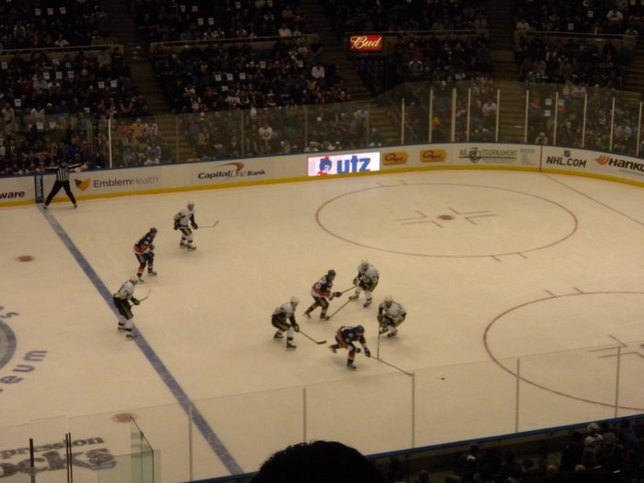 Islanders Struggle North of the Border

The Islanders began the week with a soul-crushing loss at the hands of Philadelphia. Left in desperate want of some sort of offensive production following such a weak showing, the team left for Ottawa to play the Senators.

It would certainly prove a better defensive showing for New York, but the Islanders were held scoreless for the first two periods while Ottawa knocked in two during the second. Hamonic scored what would be the Islanders’ first goal in nearly six periods of play early in the third, though it was his team’s only goal of the night. The Senators scored one more time late in the game to win 3-1. DiPietro saved 23 of 26.

For most of the Islanders’ following game against Montréal it looked as though their brief tour of Canada would end the same way it began. The Candiens shot out to a 1-0 lead in the opening minute, then doubled their lead ten minutes later.

Moulson put New York on the scoreboard to kick off the second, followed by a third Canadien goal midway through the period. Moulson scored again before the period’s end. A third New York goal, courtesy of Nielson, halfway into the last regulation period tied the game up and eventually forced overtime. Thomas Hickey used that OT to score his first goal in the NHL and put the Islanders over 4-3. Nabokov blocked 30 of 33 on the night.

The Islanders will play the Sabres next, tonight at 7 o’clock.

The Rangers fared even worse in their games against Ottawa and Montréal. They scored the first goal of the day in the second period against the Canadiens off the stick of Stralman, but it would be their only goal of the night.

Montréal tied the game six minutes later, then took control early in the third and piled on an empty-netter with just over a minute to go. Lundqvist blocked 15 of 17, but New York lost 3-1.

In their meeting with Ottawa, the Senators took a 1-0 lead 6:48 into the first, and the score would remain unchanged until nearly eleven minutes into the third.

After an injury to Ottawa goaltender Craig Anderson that had him pulled from the game, Callahan scored the first Rangers goal. He was followed quickly by McDonagh to give the team a 2-1 lead. Ottawa tied the game again less than two minutes later, sending the game into overtime and an eventual shootout.

Callahan was the only player from New York to score during the shootout, though it took the Senators seven rounds to find the net a second time.

Lundqvist stopped 35 of 37 before the Senators took the 3-2 victory.

The Rangers will meet the Canadiens again at 7 p.m. today.

The Nets won a pair of close games against the Bucks after the All-Star break. Tuesday’s game against Milwaukee had them up by ten at halftime, but their lead slowly dwindled over the next two quarters. They trailed 105-102 with only seconds left in the fourth, but Joe Johnson sunk a 3-pointer to send the game into overtime. Brooklyn’s 8-6 lead at the OT period’s conclusion gave them a 113-111 win over the Bucks.

On top of his game-saving 3, Johnson led Brooklyn with 24 points, followed by Lopez and Williams with 19 apiece.

After their win at home, the Nets followed the Bucks back to Milwaukee for their second game in as many days. This time the Bucks led 54-42 at the half, but Brooklyn would slowly cut that lead over the final two quarters. A 31-8 run from late in the third to the last two minutes of the fourth gave the Nets a 94-83 lead. It was a lead they would come close to losing as Milwaukee rallied for another 11 points, but CJ Watson closed the game out in the last 15 seconds to give Brooklyn a 97-94 win.

Williams had the highest offensive output this time with 23, backed up by Watson’s 17. Blatche picked up a double-double with 12 points and rebounds.

Yesterday’s game against the Rockets did not have nearly as much ebb and flow to it; Houston took a 34-31 lead to end the first quarter and never looked back. Though the Nets were only outscored by 2 in the second half, the showing by the Rockets was sufficient enough to come out on top 106-96.

Lopez led the team in its loss with 27 points, followed by Watson’s 17. Williams had a double-double with 15 points and 13 assists.

The Nets will play the Grizzlies next, tomorrow at 7 p.m.

The Knicks picked up just where they had left off before the All-Star break. Unfortunately, they left off by losing three of their last four.

Their first game back was played in Indiana, and it was a shellacking of the highest order. After trailing 30-18 in the first quarter, the Knicks saw themselves buried even deeper by a 44-26 second period. Though the second half was far less one-sided, the Pacers still added four more points to their lead to defeat New York by a humiliating tally of 125-91.

No Knick broke 20 points during the game, though Chandler came close with 19 in addition to 11 rebounds. Anthony had 15, though he missed two thirds of his 21 shots in the process.

After that sound defeat, New York went back to the Toronto team which beat them just before the break. The score was tied at 32 after the first quarter and the Knicks led 51-48 entering halftime, but the Raptors jumped out to a 79-70 lead in the third by virtue of a 20-8 run. The Knicks again outscored Toronto in the fourth, but it was not enough to undo the damage done; they lost 100-98.

Anthony looked more himself in this most recent loss, putting up 32 points, while JR Smith had 19 and Stoudemire scored 14.

With those two losses, the Knicks fall to third place in the NBA’s Eastern Conference and have only a one game lead over Brooklyn. They will try to regain some of the ground lost at 7 o’clock tomorrow night, against the 76ers.