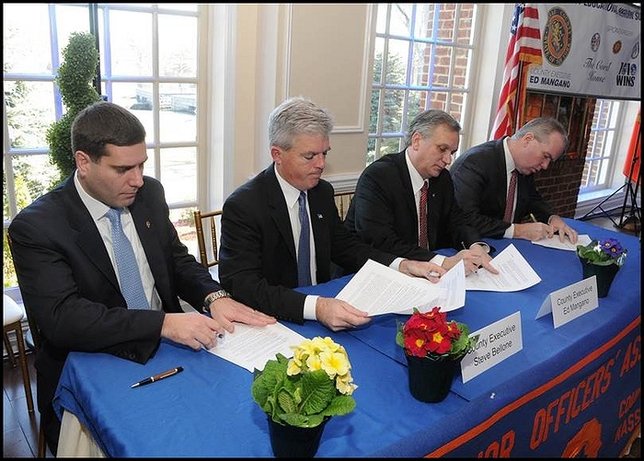 This announcement took place at the Nassau County Educational Heroin Summit and Rally that was sponsored by the Nassau County PBA, DAI, SOA and 1010WINS and featured government, law enforcement, school and medical experts who discussed the latest treatments to battle heroin and opiate addiction.

County Executive Mangano stated, "The Long Island Heroin Task Force will leverage the collective resources of both police departments towards the investigation into drug crimes and to apprehend those who contribute to the heroin epidemic. Together, we will conduct investigations, take down drug dealers through the sharing of intelligence and slow the flow of narcotics into our neighborhoods."

The Nassau County Police Department will provide space for the members of the Long Island Heroin Task Force - comprised of four detectives and one supervisor - at an undisclosed location in Nassau County. Federal funds will be utilized to employ an Intel Analyst that will be embedded with the task force.

“The dealers who flood our communities with heroin don’t care about county lines or any lines for that matter,” Suffolk County Executive Steve Bellone said. “That is why this historic partnership is critical to fight these criminal operations which cross jurisdictions. At the same time, we also know that law enforcement is just one part of the equation to tackle a public health crisis that is tearing apart communities one family at a time. That is why we must continue to invest in public outreach, treatment programs, as well as drugs like Narcan which can save lives and Vivitrol, which can help stem addiction.”