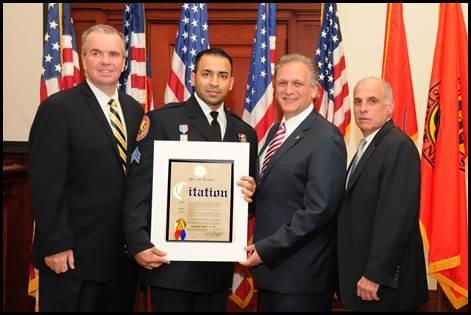 Mineola, NY - November 6, 2015 - Nassau County Executive Edward P. Mangano and Acting Police Commissioner Thomas Krumpter honored newly promoted Sergeant Mohit Arora at a special ceremony today in Mineola for persevering after being shot in the line of duty and not only making a full recovery and returning to patrol, but scoring well on the highly competitive Sergeant’s Exam and being promoted on October 19, 2015.

On August 14, 2013 at 1:54 a.m., Sgt. Arora along with other brave officers from the third precinct responded to a New Hyde Park home, where home owners had called 911 because they heard odd noises in their home. When confronted by Police Officers, one of the defendants fled the home and fired several rounds from a handgun. One of the bullets struck, Police Officer Arora in the pelvis and hip. That defendant continued to run and menace other Police Officers with his gun until he was taken into custody nearby. The second defendant was soon located in the vicinity and taken into custody as well by officers.

Police Officer Arora was transported and admitted to North Shore Hospital where he was treated for his severe injuries. After a lengthy recovery and rehabilitation process, Officer Arora returned to unrestricted duty as a patrol officer with the third precinct. He then studied and took the Department’s highly competitive Sergeant’s Exam, scored extremely well and was thus promoted to the rank of Sergeant.

“Sgt. Arora is a true testament to the men and women of the Nassau County Police Department and his desire to move through the ranks and to assist the public speaks volumes about his character,” said County Executive Mangano. “As County Executive, it gives me great pride to honor Sgt. Arora on his career advancement and his dedication to public service.”

“Sgt. Arora has been an inspiration to his fellow officers and colleagues, and his outlook and devotion to his job as a Nassau County Police Officer has never once diminished,” said Acting Police Commissioner Tom Krumpter. “He is a true credit to the Nassau County Police Department. He put his own personal difficulties and risk aside in the interest of public service and the community he serves.”