Nassau County Executive Edward P. Mangano today announced a countywide 9.5% decrease in major crime across all precincts in 2014, continuing a downward trend that began in 2009. 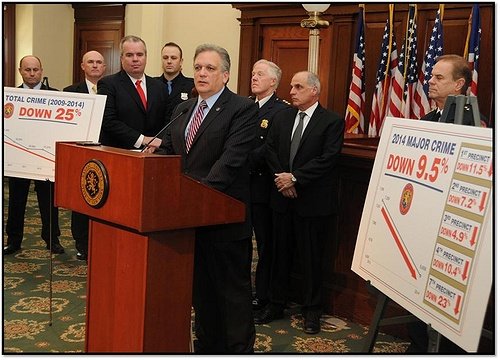 Long Island, NY - January 14, 2015 - Nassau County Executive Edward P. Mangano today announced a countywide 9.5% decrease in major crime across all precincts in 2014, continuing a downward trend that began in 2009. Since 2009, Nassau has seen crime numbers drop by 25%, including a 66% reduction in murder rates, a 27% decrease in robberies, and a 26% reduction in burglaries, and the County is now reporting the lowest crime rate in its history since 1966, the year that crime statistics were first recorded.

“I commend the brave men and women of the Police Department for their tireless efforts to combat crime and ensure Nassau County is a safe place to live, work and raise a family,” said County Executive Mangano. “It gives me great pleasure to announce that we recorded this significant decrease in major crime in Nassau County last year. Since 2009, crime plummeted by 25% in Nassau County. Nassau is the safest large suburban county in America and significantly safer than it was five years ago.”

In 2014, statistics from the Nassau County Police Department (NCPD) indicate a 53% decrease in murders, a 36% reduction in robbery crimes, and a 32% reduction in burglary crimes. Successfully reducing crime is directly attributable to a dedicated and well-trained police force, intelligence-led policing models and strategic communication. Advancements in technology have also made it possible for police officers to receive and input valuable intelligence through the computers within their patrol vehicles, effectively turning these patrol vehicles into mobile police precincts. The NCPD’s use of innovative technologies such as license plate readers and the ShotSpotter system to detect and pinpoint locations of gunfire has also contributed to the decrease in crime. Additionally, the County’s Gun Buyback program has taken nearly 3,500 guns off the streets.

“I am pleased that our predictive-policing methods are working, but we owe a debt of gratitude to the men and women of the Nassau County Police Department who are out there each and every day, getting the job done and ensuring the safety of everyone here in Nassau County,” said Acting Commissioner Krumpter.