Jonathan Schuster was arrested Friday after MTA police found him responsible for eight different incidences of making anti-Semitic graffiti on billboards at the Cedarhurst station. 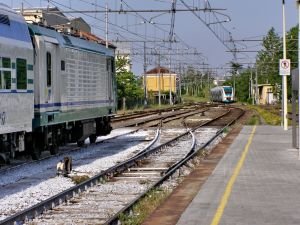 A student from Far Rockaway was arrested by Metropolitan Transportation Authority police on Friday after a year-long investigation into anti-Semitic graffiti found on eight different occasions at the Cedarhurst Train Station.

Jonathan Schuster, 18, was charged with eight counts of felony criminal mischief in the third degree as a hate crime, as well as eight counts of criminal mischief in the fourth degree and eight counts making graffiti, which are both Class A misdemeanors. Police say that Schuster began making the offensive graffiti – which was written in black marker and consisted of anti-Semitic statements laced with expletives – at the station in December 2012.  According to the police, the graffiti was always left on advertising billboards on the platform level of the station.

Schuster is a senior at Priority-1: Torah Academy of Lawrence-Cedarhurst, a yeshiva in Cedarhurst.

“The MTA Police Detective Division led by Inspector Joseph Martelli was in constant contact with the Nassau County Police Department Detective Division and Community Affairs/Biased Crime Units,” said MTA Police Chief Michael Coan in a release. “The effort was greatly enhanced by the assistance of Nassau County Crime Stoppers and we are grateful for the support of our law enforcement partners in solving this crime. We also want to thank Long island Rail Road President Helena Williams and the many LIRR employees who were our eyes and ears throughout the probe.”

In addition to the LIRR, MTA police, and Nassau County Crime Stoppers, the Nassau County Police Department was also integral to the investigation.  The NCPD sent out uniformed patrols to the station, and also provided surveillance by undercover officers. The Nassau County Police Explorers, a volunteer youth group whose members are preparing for careers in law enforcement, also volunteered their efforts, and distributed wanted posters at train stations.