Second Supermoon of the Year Visible on Thursday

The second of five total “supermoons” in 2014 will be visible in the late afternoon on Thursday, January 30th. 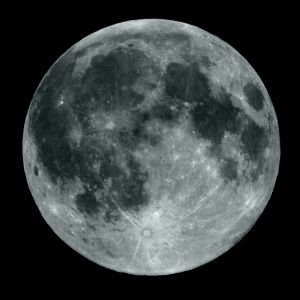 Correction – January 30, 2014 – As originally reported viewers will have to look to the sky in the late afternoon if they want a chance to see the supermoon tonight, however, according to The Epoch Times there is no guarantee that the moon will be visible at any point.

Original Story - January 28, 2014 - 2014 already saw one supermoon on New Year’s Day, but there will be yet another before the end of January. On Thursday, January 30th the moon will be slightly closer to the Earth than normal, and will appear substantially larger.

This will mark the moon’s third closest passage to the Earth for the year, however it will not be visible during the nighttime. As was the case with this month’s first supermoon, this close flyby will occur during the new moon phase, meaning that onlookers will have to glance up during the later daylight hours if they want a chance to catch a glimpse before the heavenly body is hidden from sight.

Also known as perigee full or perigee new moons, the phenomenon occurs 4-6 times a year when our natural satellite is at or within 90% of its closest approach to the Earth during the full or new moon phase.

Three more supermoons will occur this year between July and September, with each of those occurring during the full moon phase; August will mark the moon’s closest passage at a distance of 356,896 kilometers (nearly 221,765 miles). While this month’s perigee new moons won’t be quite as visible as the summer’s perigee full moons, they still have an impact on the planet by causing “spring tides” much larger than normal high tide.  This will also be the only time that a single month has two supermoons until January 2018.