For the second time since Monday, a tugboat sank near Atlantic Beach. Fortunately, all crewmembers were saved. 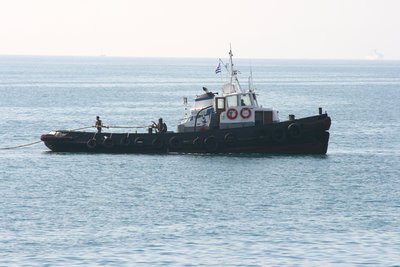 Late Wednesday afternoon, for the second time in three days, a tugboat sank offshore of Long Island in the waters off of Atlantic Beach.

It is still unknown as to what sunk the 38-foot long towing vessel, named the Sea Lion, but the U.S. Coast Guard does know that the tugboat started taking on water at about 3 p.m. on Wednesday.

Three crewmembers were rescued from the sinking ship and medically evaluated by the Coast Guard, who was called by passengers in a nearby boat who saw the ship going under.  A fourth crewmember was pulled from the chilly waters by boaters who witnessed the scene.

“As we pulled up to the boat the tugboat was maybe two feet of the boat left.  Just the bow sticking out and the guy was laying on top as the boat went under him,” said Bjoern Kils, a professional photographer on the nearby boat, to CBS News. “He leaped to my boat just as his boat just went under in a broil of air and water and bubbles.”

Only one of the four crewmembers suffered serious injuries. By 4 p.m., the Sea Lion was completely underwater.

At about 7:30 p.m. on Monday evening, a 26-foot tugboat named Pushy separated from the barge it as carrying and sank after being hit by a ten-foot swell off of Atlantic Beach. The Coast Guard responded, and all four of the crewmembers onboard were rescued.  Pushy was towing a barge that was carrying construction equipment, which ended up washing ashore.

Officials had to wait until Wednesday morning for high tide to send another tugboat out to retrieve the barge.

According to the Coast Guard, no oil leaks or environmental damages have been reported at this time.

The Coast Guard states that there is no connection between the sinking of the two boats.