For the tiny piping plover, however, Hurricane Sandy may have been a blessing in disguise. 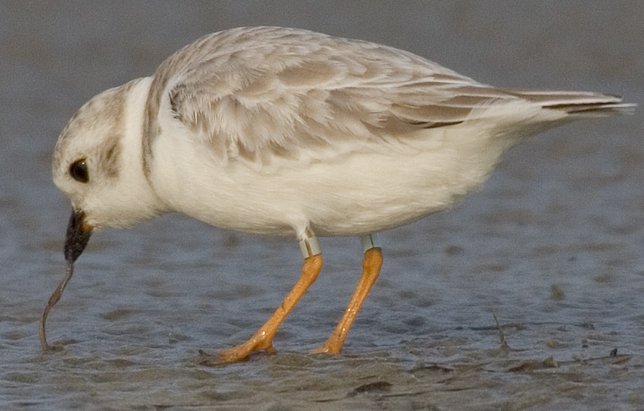 Long Island, NY - January 28th, 2014 - Few can forget the destruction left behind by Hurricane Sandy, which pummeled the shorelines of the Eastern United States. For the tiny piping plover, however, the storm may have been a blessing in disguise.

The federally threatened shorebird, which migrates in spring to nest on sandy beaches along the Atlantic coast, is expected to capitalize on new habitat created by the storm on hard-hit Long Island, N.Y.

“Hurricane Sandy pushed sand over the vegetation of the barrier islands, leaving behind wider sandy beaches, which is the plover’s preferred habitat,” said Jim Fraser, professor of wildlife conservation in the College of Natural Resources and Environment, who has studied piping plovers and other shorebirds for almost three decades.

The storm created three inlets on Long Island’s south shore, two of which the U.S. Army Corps of Engineers quickly filled. Fraser says he hopes the third inlet, in a designated wilderness area of Fire Island National Seashore, will remain open, as it is New York’s only natural inlet.

Long since the storm has passed, the inlet continues to shape the barrier islands, further improving plover habitat. The birds like to feed on insects and invertebrates that reside in intertidal flats — shallow, watery areas on the bay side of barrier islands.

Leaving the inlet open would not only be good for the piping plover, it would also be a smart move for taxpayers, according to Fraser. “Post-storm public works projects are incredibly expensive. Ultimately, the taxpayer ends up footing the bill.”

On precarious barrier islands, houses and other buildings are vulnerable to destruction. The sands shift constantly under normal conditions; superstorms like Sandy rearrange them dramatically.

“We live too close to the sea,” Fraser continued. “The human, structural, and environmental costs are very high, and they are increasing with each storm as coastal development shows no signs of abating.”

While storm damage affects humans negatively, it can have the opposite effect on wildlife. “Storm-created habitat is good for piping plovers and other birds,” explained Fraser. Other positive environment impacts have also been observed. “Local people say the fishing is better, clams are growing faster, and the water is cleaner.”

Fraser’s work studying piping plovers in other environments, including a 12-year observation in nearby West Hampton Dunes, N.Y., confirms that plover populations increase when new habitat is created on barrier islands after massive storms. He expects to see plover populations on Long Island surge when the birds return this spring. His ongoing research is monitoring the outcome.