The property was a dangerous eyesore that attracted vandals and squatters. 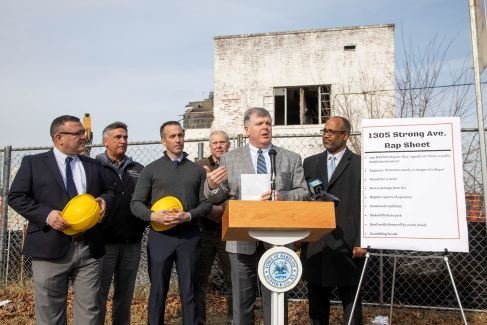 The Town of Babylon recently demolished a blighted 25,000-square foot building that was once home to a missile-component test facility, as well as a manufacturing facility, a wallpaper production company and a car and boat repair facility before sitting empty for 17 years, according to a statement released by the town.

The property at 1305 S. Strong Avenue in Copiague had become a nuisance and deemed a threat to the safety of the community.

In 2015 a fire that is thought to have been started by squatters tore through the neglected building, making it even more of an eyesore that it was previously. Officials also discovered an unsafe makeshift skate park that was discovered during a tour of the building. The tin roof of the structure had flown off dangerously in previous storms, the facade is crumbling and it attracts vandals who deface the building.

Town Supervisor Rich Schaffer thanked the New York State DEC and the Copiague Fire Department for cleaning up the property and keeping it safe.

The property was cited by New York DEC in 2011 as a “significant threat to public health or the environment.”

“This property has a long and uniquely sordid history and I can speak on behalf of the Town of Babylon and entire community that I’m glad to see it finally come down, I’m tired of this and I know everyone else is tired of it, too," said Schaffer. "I look forward to future development on this site.”