Due to the unusually severe winter weather we've had, Long Island's roadways have become strange and perilous obstacle courses filled with dips, depressions, cavities, holes and even craters filled with standing water. 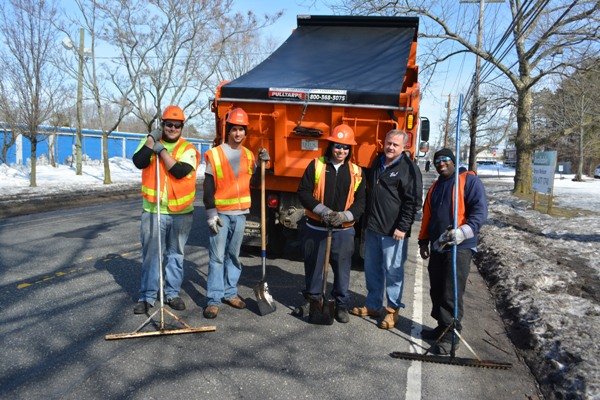 It’s happening to people all over the Island. The roadways they’ve driven down hundreds of times before have become strange and perilous obstacle courses filled with dips, depressions, cavities, holes and craters.

And you’ve probably seen people in front of you maneuver in unusual ways to avoid them. Suddenly traffic slows, and each car ahead of you bears sharply to the left, then to the right. It’s your turn, and now you see why. They’re avoiding a newly-created gaping sinkhole filled with water!

Hitting one of these unusual obstacles at a high enough speed could seriously interrupt your day—and your car’s alignment (or worse). Protecting you from these severe winter weather hazards is a top priority for town and county highway crews who are out in full force addressing them.

“My administration has an aggressive program to fill potholes throughout Nassau in order to maintain the highest level of safety for vehicles and pedestrians on County roads,” Mangano said.

He encourages residents to report pothole issues to the Nassau County Department of Highways at 516-571-6900 or through the Nassau Now mobile application on smartphones or mobile devices. The app will enable a photograph to be taken of the area and sent to the Highway Department with the GPS location. Pothole repairs, Mangano assured, are made within 24 hours of being reported by residents.

In Suffolk County, Town of Islip Highway crews have been out in almost every hamlet to ensure roadways are safe. On Pine Aire Drive in Brentwood, hundreds of potholes were filled from Fifth Avenue to the Brentwood Train Station. Islip Town Councilman John Cochrane, Jr. met with highway crews during the operation to assess the damage and repair work and to thank them for a job well done. Town of Islip residents are urged call 631-224-5600 to report a pothole.

"An unprecedented combination of weather, roads already in poor condition and the inordinate number of trucks in our region have led to an epic number of potholes in 2014," said Robert Sinclair Jr., manager of media relations for the American Automobile Association New York.

The AAA, a not-for-profit federation of 50 motor clubs serving over 53 million members, reminds motorists that the best way to avoid potholes is to maintain eye contact with the road at all times, keep both hands on the wheel and to drive at speeds slow enough to be able to maneuver their cars once they spot one on the road ahead of them. Maneuvering abruptly around potholes can cause serious accidents.

As spring approaches and streets begin to thaw, we can expect an increase in damaged roads, and AAA urges drivers to report dangerous conditions.

Potholes on state-owned highways in Nassau or Suffolk Counties can be reported to the New York State Department of Transportation (NYSDOT) by calling (800)POTHOLE (800-768-4653). Potholes on other roadways fall under federal, county, town, village or private jurisdiction, depending on where they are located.

Do you have a pothole picture or experience you'd like to share?
Let us know! We'll be sure to include it in this story!

Pictured in Feature Photo: Town of Islip highway crews making repairs in Brentwood. Photo via the Town of Islip's Facebook Page. Pictured in Gallery: A pothole on a local roadway in Setauket.