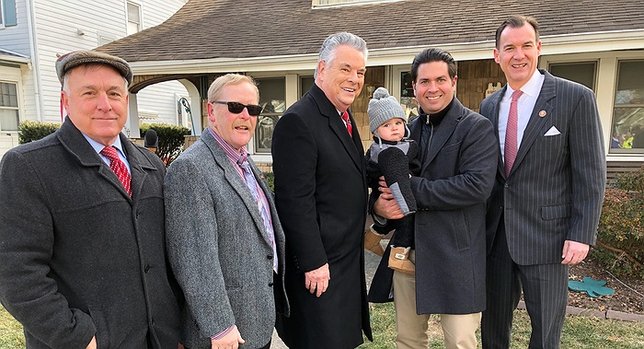 Long Island, NY - January 7, 2019 - Today, Congressmen Tom Suozzi and Peter King announced bipartisan legislation - the “King-Suozzi bill” - that would provide tax relief for Long Islanders. The bill, H.R. 257, would retroactively reinstate a full deduction for state and local taxes (SALT). In 2017, a $10,000 cap was put on SALT deductions that has negatively affected middle-class families, particularly those living in high cost of living areas like Long Island. Reinstating a full SALT deduction will provide these families with tax relief; not more tax burdens.
“The tax bill was a punch in the gut for Long Islanders, and all New Yorkers, who already subsidize other states by paying more in taxes than we receive back from the federal government,” said Congressman Suozzi. “The limitation of this critical deduction has resulted in a devasting tax increase for the middle class. My district is in the top ten in America state and local tax deduction claims. In New York’s third district, over 250,000 families, or 43 percent of households, claim this deduction at an average rate of $18,300.”
"Eliminating deductions for local and state taxes will have a devastating effect on Long Island,” said Congressmen King. “We give far more to Washington then we get back. For every dollar we give, we get $.79 back. That’s a $48 billion shortfall and hurts our middle class Long Islanders. This legislation is critical.”
Long Island was particularly hard hit by the $10,000 cap on SALT deductions. In the Congressmen’s districts, nearly half of all tax filers claimed the deduction with an average of nearly $20,000. Capping the deduction has cost Long Islanders, and all New Yorkers, billions more in additional taxes. The average SALT burden is above the $10,000 cap in 52 of 62 counties in New York. The additional tax burden is especially unfair because New York is already a net donor to the federal government, sending $48 billion more in taxes to the federal government than we receive in return.
"This is an existential issue for Long Island. There is no Republican or Democratic position. It is about the survival of Long Island’s middle class which sorely depends on this exemption to makes ends meet. The response by Congressmen Peter King and Tom Suozzi not only seeks to protect every Long Island homeowner from this threat, but demonstrates that bipartisanship remains strong on Long Island," said Kyle Strober, Executive Director, ABLI, a Long Island advocacy organization.