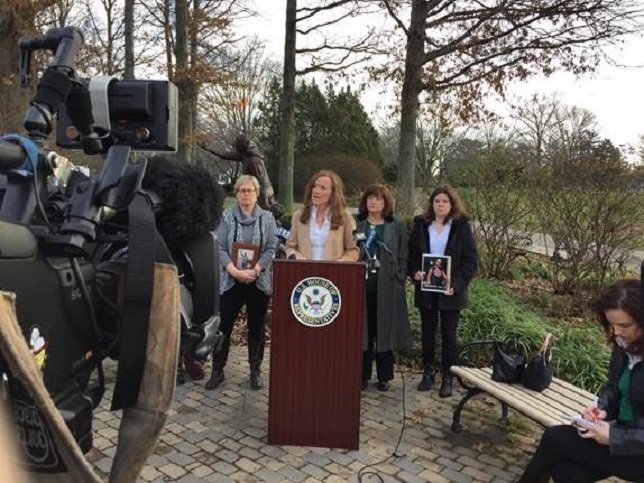 On one of the deadliest drunk driving days of the year, Rice unveils bill that could prevent an estimated 85% of all DWI-related deaths and save nearly $343 billion over 15 years.

Garden City, NY - December 31, 2015 - U.S. Representative Kathleen Rice held a press conference today with anti-DWI advocates to introduce new legislation requiring that within 10 years, all new cars sold in the U.S. come equipped with advanced DWI-prevention technology that detects a driver’s blood alcohol content (BAC) and prevents the car from moving if the driver’s BAC is at or above the legal limit. The advanced technology is currently being developed through the Driver Alcohol Detection System for Safety (DADSS) program, a research partnership between the National Highway Traffic Safety Administration (NHTSA) and the Automotive Coalition for Traffic Safety (ACTS), which represents 17 leading automobile manufacturers. In June, 2015, NHTSA and ACTS unveiled prototypes of touch-based and breath-based technologies, which will be integrated into vehicles for further testing as researchers work to develop final products. The touch-based technology responds to the touch of a driver’s fingertip and uses infrared light to measure the driver’s BAC. Unlike a breathalyzer, the DADSS breath-based technology does not require a driver to breathe into a tube – a driver simply enters the vehicle and breathes normally, and sensors detect the driver’s BAC using infrared light. Rice’s legislation, the End Drunk Driving Act, will require the technology to be installed in all new cars sold in the U.S. within 10 years of the bill’s enactment. The legislation significantly boosts funding for the DADSS program to help ensure that the technology will be fully developed, tested and ready for commercial use within 10 years.

More information about the DADSS program, including a video demonstration of how the technology works is below.

A study conducted by researchers at the University of Michigan found that requiring DWI-prevention technology in all new cars sold in the U.S. could prevent an estimated 85% of all drunk driving-related fatalities over 15 years, saving more than 59,000 lives. It could also prevent an estimated 1.25 million nonfatal drunk driving-related injuries over the same 15 year period, a reduction of 84-89%. The study also found that preventing these deaths and injuries would save nearly $343 billion over 15 years, and the cost of installing the technology would be recovered within the first three years.

“New Year’s Eve is a celebration of the hope that each new year brings, the hope that we can keep improving ourselves and our society and keep striving towards a better future,” said Representative Kathleen Rice. “My hope is that we can put an end to drunk driving once and for all, that we will no longer lose 10,000 lives each year to this crime, and passing this bill will help make that future a reality. Advanced DWI-prevention technology has the potential to save thousands of lives and billions of dollars by keeping drunk drivers off the roads, and I’m going to keep fighting to make it standard safety equipment in all new cars sold in this country.”

The full text of Rice’s legislation can be found here.