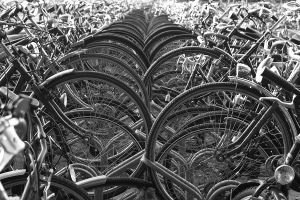 New York, NY - April 4, 2014 - U.S. Senator Charles E. Schumer today announced that his bike share related amendment to a must-pass tax bill has been accepted.  The amendment provides a tax exclusion for those who use Citi Bike and other bike share programs for commuting purposes.  Under this legislation, employees will be able to exclude $20 a month from their income for income tax purposes, if they have an employer-provided Citi Bike membership.  This program already exists for mass transit benefits, the cost of parking a car at work, and the cost of storing or buying a bike you ride to work.  Last year, the IRS ruled that costs for bike share memberships like Citi Bike were not covered, and Schumer's legislation will fix that.  The amendment will now be included in the final bill, which will receive a vote on the Senate floor
“Bike-share programs are a boon to commuters, the economy and clean air – and those who use them deserve the same benefits granted to those who drive cars and use mass transit to get to work,” said Schumer.  “This legislation will encourage employers to offer bike-share memberships as perks to their employees, much like transit benefits for other kinds of commutes, and will enhance both the financial standing and the importance of these programs.  We’re riding quickly down the path and getting close to enacting this provision into law.”
The Transportation Fringe Benefit in the Internal Revenue Code allows employers to provide compensation for the transportation costs of their employees on a tax-free basis. This incentive covers costs associated with parking, mass transit and, since 2008, costs associated with bike maintenance and storage if the employee regularly bikes to work.
Unfortunately, last summer, the IRS ruled that costs associated with bike share memberships were not eligible under the statute as currently drafted and indicated legislative action would be necessary to broaden the definition of qualifying expenses.  This amendment would do just that.  Specifically, it adds bike share costs to the list of recognized expenses eligible for the transportation fringe benefit under Section 132(f) of the Internal Revenue Code.  Like the already-existing incentive for those who ride their own bike to work, employees using a bike share program to commute to work would now be eligible to receive $20 per month on a tax-free basis from their employer to subsidize their bike share membership.
This would mean employers in NYC could now offer free Citi Bike memberships as a benefit to their employees. The annual membership is $95.
In 2013, Citi Bike launched its program with 330 stations and 6,000 bikes in New York City. Citi Bike now has a membership of over 100,000. In Washington, D.C. the bike share program grew from 400 bikes to 1,900 bikes in just three years. Across the country, there are more than 18,000 bike share programs across, with more in the works.
Schumer also stressed that other, larger scale priorities will also be included in the tax bill, such as an almost doubling of the mass transit commuter tax benefit that he has been championing for years.