Beginning December 30, 2012, Nassau Inter-County Express (NICE) will put in effect new schedules that will include changes to most routes in the system. 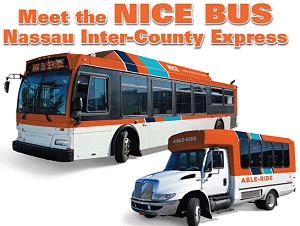 December 19, 2012 - Beginning December 30, 2012, Nassau Inter-County Express (NICE) will put in effect new schedules that will include changes to most routes in the system.  Every quarter, NICE reviews and adjusts schedules to improve overall system performance, including on-time performance.

NICE customers can pick up new printed timetable brochures on their bus or at NICE and MTA transit centers (clearly marked December 30, 2012, visit www.nicebus.com or call 516-228-4000 to determine if and how these service adjustments may affect your  bus. Printed schedules are also available at more than 75 government offices, hospitals, colleges, libraries and others locations through-out Nassau County.

In most cases, service adjustments consist of minor timetable adjustments that will not be noticeable to riders.  In a few cases, routes have been slightly restructured to make transfers to other routes possible or require transfers where they did not exist.  Also, new stops on some express routes will be added.

On a quarterly basis, NICE reviews and adjusts schedules in response to rider patterns, to address specific concerns and to maximize utilization of the system in ways that benefit the most riders possible.