Robert Stundis was fired from Acme Bus Company on Friday, following his arrest on Wednesday for Driving while Ability Impaired.

A Long Island mini bus driver was fired by Acme Bus Company last week after driving a company-owned vehicle while under the influence of alcohol.  Suffolk County Sheriff Vincent F. DeMarco responded to emergency calls by drivers who reported that a school bus was driving on three wheels and arrested Robert Stundis last Wednesday. 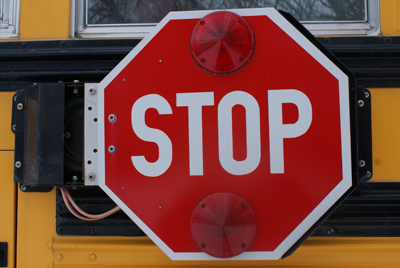 Stundis was apprehended while driving on the Long Island Expressway near exit 60.  His blood alcohol content was only .1 shy of the legal limit.
The Three Village School District, which serves residents of East Setauket and Stony Brook, reported that Stundis had dropped students off from a district middle and elementary school prior to his arrest at 4:45 p.m.
The young students were physically unharmed, despite a near-accident and missed bus stops.
Stundis was formally charged with aggravated driving while intoxicated, and his license was suspended.  His bail was set at $25,000, but Stundis is currently being held at Suffolk County Jail.  According to prosecutors, Stundis has a 1992 conviction for impaired driving, but New York State law only prohibits drivers with two or more driving while ability impaired convictions within the last ten years.
Stundis’ next court appearance is scheduled for Oct. 18.
Share your thoughts on this article by posting your comment below or visiting our Long Island Living discussion forum.