Gov. Cuomo dismissed Steve Kuhr from his position as chief of the state's Office of Emergency Management after learning that Kuhr diverted emergency crews to remove a fallen tree from his property during early hurricane ...

Gov. Cuomo has fired the chief of the Office of Emergency Management, Steve Kuhr, of East Northport, after being notified that Kuhr had asked requested that emergency workers remove a tree that had fallen on his property during Hurricane Sandy.

The Office of Emergency Management is the state’s counterpart to FEMA, and is responsible for coordinating the reponse to disasters in the state. 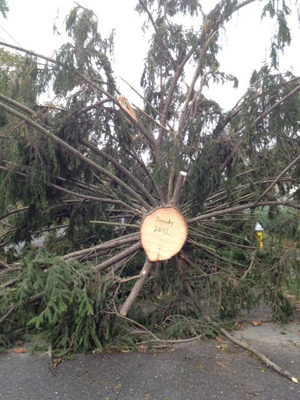 Kuhr, who was appointed by Cuomo last October and earned a base salary of $153,000, was working out of the state’s emergency-command center in Albany, called Suffolk’s Fire Rescue and Emergency Services Commissioner Joseph Williams before the storm had abatted, to have the county remove the tree, according to unidentified county officials.  A team of volunteer firefighters followed through with the request.
The governor’s staff was later notified of Kuhr’s request by Chief Deputy County Executive Regina Calcaterra.
Cuomo has not yet made any statement’s on the incident, though last year during Kuhr’s appointment, he said “no one was better suited” for the position, citing Kuhr’s extensive experience in emergency services including 20 years with the New York Fire Department, and serving as president of Strategic Emergency Group LLC, a private emergency management company.
The New York Times, which broke the story, calls the move unusual because it comes while the state is still mid-crisis, though Kuhr was not the senior aide leading recovery efforts.
Share your thoughts on this article by posting your comment below or visiting our Long Island Living discussion forum.