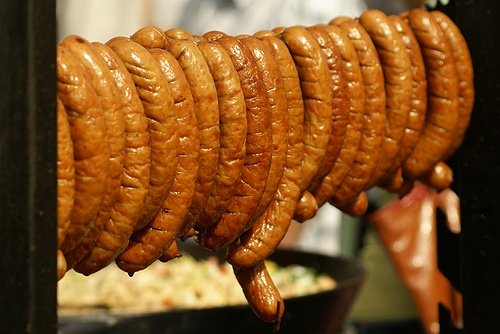 Oktoberfest is in full swing and what better way to celebrate and get in the true Oktoberfest spirit than to enjoy some tasty traditional German cuisine! Long Island is a far stretch from Munich but that doesn’t have to stop you from celebrating the festival right here. Immerse yourself in the German traditions, heritage, and culture. Then you’ll feel like you’re right there in Munich, minus the language barrier. Now, if you really want to get in the true Oktoberfest spirit, men best put on your Lederhosen and ladies your Dirndl dresses!

Let’s not forget Oktoberfest is the world’s most famous beer festival. Head out to your good, local beer distributor to purchase a great German beer, like Ayinger Bräu Weisse or Paulaner Hefe-Weissbier Naturtrüb, to pair with your meal. Even if you’re not out and about at an Oktoberfest event you’ll be eating, and drinking, just as well in the comfort of home.

Gurkensalat (German cucumber salad)
The dill and cucumber mixture makes a great side dish to all of those warm meat and fried dishes.

Preparation:
Use a vegetable peeler to peel your cucumber then slice them very thin. Place the sliced cucumber on a platter and throw the salt on top. Let them sit there for a half hour then squeeze out any excess water.

Get a bowl and thoroughly mix the sour cream, white wine vinegar, oil, sugar, and dill together. Chill in the fridge for an hour.

Once chilled coat the cucumbers in the dressing and add the pinches of pepper right before being served. Makes 4 servings.

German Potato Salad
Unlike most other potato salads this one is served hot!

Preparation:
Boil a large pot of water. Add salt then add potatoes once boiling. Cook the potatoes until they are both firm and tender, for approximately 15 minutes or so. Drain them then chop them up once cool.

Next cook the bacon in a skillet until evenly brown on each side on medium-high heat. Drain but leave the extra grease/bacon fat in the skillet. Crumble up the bacon into pieces then put them aside.

Add the sugar, flour, vinegar, and water to the leftover bacon fat and cook until it thickens up over medium heat. Now add bacon, potatoes, and chopped scallions to the thick mixture and stir together. Cook everything together until hot and add salt and pepper if you’d like. Should make enough for about 4 servings.

Preparation:
Heat up the grill until at a medium-high heat and glaze the grate with oil. In a large pot boil the beer and onion then add the sausages. Next add in the various spices. Turn down the heat and let the concoction cook for another 10 minutes or so.

Take out the bratwurst and put it on the grill. Let the onions keep cooking in the beer but turn the heat to low. You can use this extra liquid as a topping for your sausages later on. Cook the bratwurst and turn over once for about 5 – 10 minutes. Then, enjoy!

Don’t feel much like cooking these up yourself? Visit one of these festive Oktoberfest celebrations happening on Long Island and enjoy the German cuisine there!