Sakura Matsuri: A Celebration of Traditional and Contemporary Japanese Culture 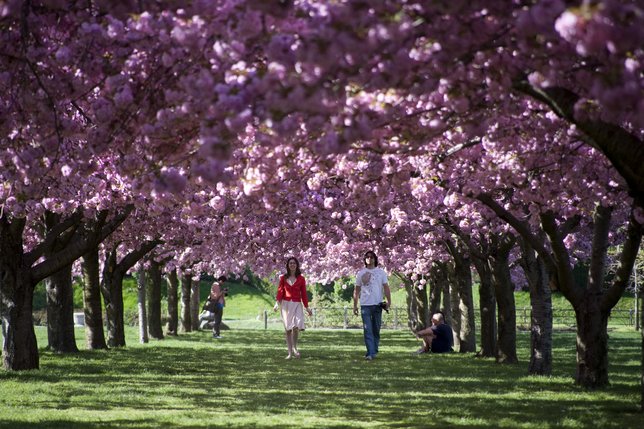 Brooklyn, NY—Hanami, the Japanese cultural tradition of enjoying the cherry blossom season, has begun at BBG. Hanami culminates in the Garden’s legendary weekend festival Sakura Matsuri—popularly considered New York’s rite of spring, and the nation’s largest event in a public garden. Sakura Matsuri (April 27 and 28, 10 a.m. to 6 p.m.) features over 60 performances, demonstrations, and exhibits—many of which are specially commissioned for this dynamic festival—that showcase the best of traditional and contemporary Japanese culture. In recent years, Sakura Matsuri has attracted one of the largest, most colorful audiences for any cultural event in the city.

Sakura Matsuri 2013 will present some performers direct from Japan, including Zakuro Chindon, an all-female marching band, and The Asterplace, whose anime rock is celebrated in the cosplay (costume play) community. Other festival artists hail from the five boroughs, such as Taiko Masala, the renowned drumming group, and jazz pianist Kuni Mikami, who interprets Japanese folk songs to great acclaim.

Saturday’s final main-stage performance features Cobu, which blends taiko drumming with tap dance for a Stomp-style Japanese ruckus. The full festival culminates on Sunday with the Cosplay Fashion Show, presenting in partnership with New York Comic Con more than 20 of the city’s most extravagant and talented cosplayers to a crowd of thousands.

Perennial Sakura Matsuri favorites returning in 2013 include the following:


BBG’s Osborne Garden will feature manga and other contemporary Japanese culture, including the following:


Kids’ activities include the following:

The full event schedule is available at bbg.org/sakuramatsuri. The cherry display is tracked in real time on BBG’s web-based CherryWatch feature, which maps the entire collection and provides daily blooming updates. The Garden encourages visitors to share their cherry blossom images—amateur or professional—on social media the hashtag #bbgcherries.

Admission to Sakura Matsuri is $20 for adults, $10 for students (12 to 17) and seniors (65 and over). BBG members and children under 12 years of age enter for free. Admission fees will be charged all weekend during Sakura Matsuri. Events are free with Garden admission and will be held rain or shine.

Note: All press must check in at the Visitor Center (990 Washington Avenue) and are encouraged to email communications@bbg.org or call 718-623-7200 x7032 in advance for press access.

General Information
Founded in 1910, Brooklyn Botanic Garden (BBG) is an independent nonprofit institution committed to education, research, and the display of horticulture. BBG serves communities in New York City and internationally through its world-class gardens, extensive research collections, and numerous educational and community programs. Situated on 52 acres in the heart of Brooklyn, the Garden is home to over 12,000 kinds of plants and hosts more than 725,000 visitors annually.

Brooklyn Botanic Garden is open from 8 a.m. to 6 p.m. Tuesday through Friday, and from 10 a.m. to 6 p.m. on Saturday and Sunday. The Garden is closed on Mondays except public holidays. General admission is $10 for adults and $5 for senior citizens (65 and older) and students with ID. Children under 12, all school groups, and Garden members are admitted free at all times. Visitor entrances are at Flatbush Avenue, 990 Washington Avenue, and Eastern Parkway. For directions, please visit bbg.org/visit/directions.