There were no injuries after the helicopter made a hard landing in the water. 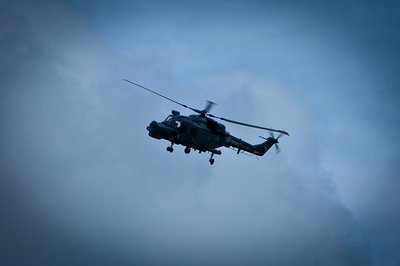 A helicopter carrying a family of four made an emergency landing in the Hudson River around noon on Sunday after it lost power shortly after takeoff. Nobody was injured during the incident, according to Fox News.

The family on board the helicopter was from Sweden, they were planning on a tour of New York City when the pilot had to make a hard landing in the Hudson.

The helicopter took off from the Wall Street Heliport. According to Deputy Fire Chief Thomas McKavanaugh, the aircraft was in the air for about 12 minutes before the pilot made the emergency landing.

The helicopter was equipped with pontoons, and the pilot was able to keep it upright as he landed. He made the landing near 79th Street near the New York City Marina.

After the landing, a man named Sebastien Berthelet approached the helicopter on his boat to help. He took the pilot back to land.

"At the beginning, we thought maybe it was an exercise… [but] when he hit the water, it was hard,” Berthelet said in an interview with Fox News. The pilot apparently told Berthelet that the landing could have been smoother.

The Swedish family was taken back to shore by another boat. Although nobody was injured during the landing, the family was brought to a medical center for observation.

According to the Federal Aviation Administration (FAA), the helicopter is a Bell 206. The aircraft is registered to a company called New York Helicopter, which offers tours around the city. The FAA is still investigating the incident along with National Transportation Safety Board.

This incident conjures memories of the 2009 Hudson River crash, when pilot Chesley Sullenberger III was able to safely land a U.S. Airways flight in the river after hitting a flock of geese. All 155 passengers aboard the plane survived.