Greenpeace's Rolling Sunshine truck has been providing emergency power to one of Rockaway's worst hit neighborhoods.

New Yorkers from Montauk Point to West Side Highway are still recovering from Hurricane Sandy, and hundreds of thousands are still without power, including gas stations.  Greenpeace has stepped into the relief effort by dispatching it’s only solar truck in the United States to power up one Rockaway gas station. 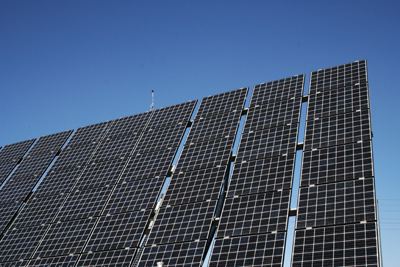 Rockaway was one of the hardest hit regions on the southern coast of Long Island.  Greenpeace sent it’s Rolling Sunlight solar truck to Rockaway the day after the storm hit.  The 256 square feet of solar panels produces 50 kilowatt hours of energy a day, enough to run 240 stoves.  In this case, it’s keeping a much needed gas station operating.

Rolling Sunlight has been generating power for this Rockaway gas station at the corner of Rockaway Beach Boulevard and 113th Street since Oct. 31, earlier than even the Red Cross or FEMA.
According to Greenpeace’s Joshua Ingle, once the truck arrives set-up only takes 15 minutes.  The truck, which was built 10 years ago, is designed to charge batteries from the solar cells.  That energy is ultimately converted into 120/240 AC, which can be used directly for lighting and other uses.
Greenpeace has set up seven relief stations throughout the city, and is helping to coordinate donation efforts.
The truck has been used in the past the power the Seattle Space Needle, and has made appearances Occupy Wall Street and Occupy Washington D.C. events.
Share your thoughts on this article by posting your comment below or visiting our Long Island Living discussion forum.