Officer Cody Matthews was invited to be an official witness to the marriage and signed the marriage certificate. 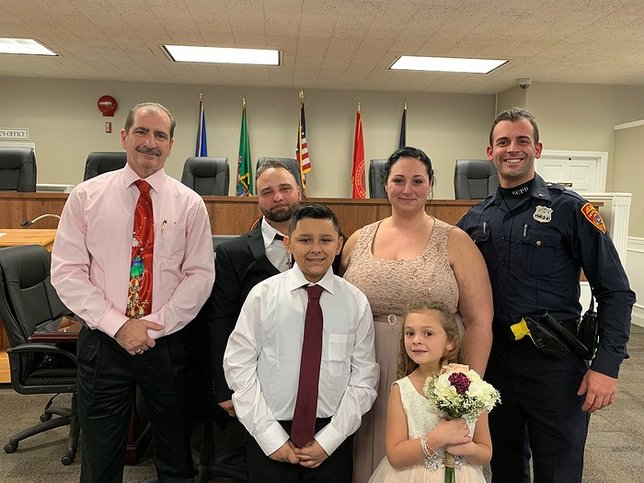 Shirley, NY - December 24, 2018 - A Suffolk County Police officer drove a couple to their wedding ceremony after their vehicle became disabled following a two-vehicle crash in Shirley on Saturday, December 22.
Joseph DeMichele was driving a 1998 Jeep Grand Cherokee westbound on Montauk Highway, near Plymouth Place, when a vehicle made a U-turn in front of the Jeep and the vehicles collided at 1:15 p.m. No one was injured in the crash and the Jeep became disabled.
DeMichele, 36, who was in the car with his fiancée, Feliece Terwilliger, 36, and their two children, Jayden Corriche, 10, and Gianna DeMichele, 5, were traveling to the couple’s wedding ceremony at Town Hall in the Village of Lake Grove.
Seventh Precinct Police Officer Cody Matthews, who responded to the crash, drove the couple to the wedding in his police vehicle. Officer Matthews was invited to be an official witness to the marriage and signed the marriage certificate.