One of the world’s largest tech companies has purchased one of the most well-known robotics firms. 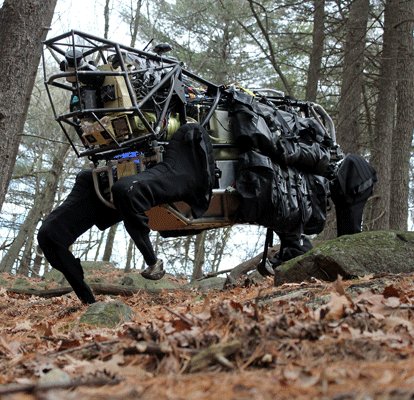 From search engines and social media to operating systems and smartphones, Google now seems to have its hands in just about every technology market. According to a report from the New York Times published this weekend, we can now add military robots to that list.

Boston Dynamics, a Massachusetts-based company which has created amazing robots capable of traveling over any terrain that soldiers and marines traverse by foot and transporting several hundred pounds of cargo, is now part of the Google portfolio. Though perhaps the biggest name recently brought under the tech-giant’s umbrella, Boston Dynamics is actually the eighth robotics company purchased by Google in the last six months; Google has declined to say how much it paid for any of the firms.

Among the robot-maker’s many designs are a number of incredible engineering feats. Their Cheetah is the fastest robot ever built, capable of running 29 mph (about 1 mph faster than Olympic runner Usain Bolt) on a flat surface, and a multi-terrain successor named the WildCat is slated to continue outdoor field testing in the near future. BigDog, a slower machine at a max speed of 4 mph, is made to carry loads up 340 lbs and can cross over muddy hills, piles of rubble, snow, and water without losing its balance. One of the company’s more striking projects, Atlas, takes a humanoid form, walking on two legs while it navigates challenging land obstacles and carries heavy loads.

Google did not reveal exactly what it plans to accomplish with its most recent acquisition, but executive Andy Rubin may have dropped a hint when he said “Competitions like the Darpa Robotics Challenge stretch participants to try to solve problems that matter and we hope to learn from the teams’ insights around disaster relief.”

Times reporter John Markoff speculates that future robotics initiatives from the Mountain View-based company could concern warehouse work, package delivery or even elder care. The purchase does come less than two weeks after Amazon announced its Prime Air automated drone-delivery project; Google could also be hoping to use its new robotic partners to shore up its ongoing self-driving car venture.

Whatever Google’s long term goal is, it does not appear to be of actual military purpose. The new owner of Boston Dynamics says it will honor the company’s existing $10.8 million contract with Darpa, but has little interest in becoming a military contractor itself. Boston Dynamics’ founder, Dr. Marc Raibert, has also previously said that he does not consider his company a military contractor, and that it is simply focused on advancing robotic technologies.

“I am excited by Andy [Rubin] and Google’s ability to think very, very big, with the resources to make it happen,” Raibert said of the acquisition.