Despite a longstanding, bitter rivalry with the Red Sox, the Yankees honored Boston and the victims of the bombing throughout the game last night. 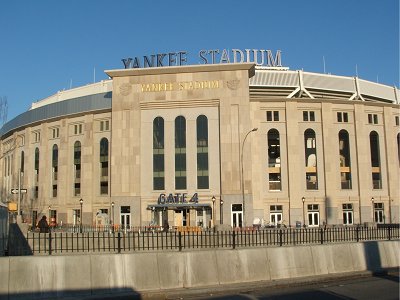 The rivalry between the Yankees and Red Sox is well documented. As two of the MLB’s oldest franchises, both clubs date back over 100 years and have been in close competition for most of that time. On December 26, 1919 Babe Ruth was famously traded from Boston to New York, giving way to the Yank’s first World Series victory several seasons later and initiating a championship drought that followed the Sox for over 85 years.

Fans have played a pivotal role in the relationship, turning out in droves whenever the other team comes to town to cheer on their own hometown heroes and heckle the enemy. For many, the rivalry goes beyond a century-old competition or strong disdain for the other team, bordering on a pure, intense enmity.

Last night, the Yankees put all that aside. On the exterior of Yankee Stadium, the team had a large banner with the words “United We Stand” emblazoned between their own logo and that of the Red Sox; inside the messages “New York Stands with Boston” and “Pray for Boston” enveloped a ribbon containing both logos which was displayed on the stadium’s largest screen. A moment of silence was held for the victims of the marathon bombing before the game, and New York honored its rival town by playing “Sweet Caroline” between the 3rd and 4th inning. The Neil Diamond classic is a Red Sox staple, played during all home games.

Manager Joe Girardi said of the tune “You think about that being a song that's a tradition there—it's special to Fenway Park and the people of Boston. We're behind them. Put the baseball teams aside. We want to be there for them.”

A statement released by the team yesterday read “Our thoughts and prayers go out to the victims and the families who were affected by the bombings and our respect and admiration go out to the police, medical personnel and first responders who acted so heroically.  We stand united with the participants, volunteers, staff and spectators of the Boston Marathon and the people of Boston.”

Kevin Youkilis, a newcomer to the Yankees and long-time member of the Red Sox, was hit particularly hard by the tragedy. “It's just a tragic day,” he said. “You have thousands of people down there just really enjoying amazing feats. I've been down there on the finish line, and it's an amazing thing to watch these people finish a marathon. Then something tragic like that happens; you can't put it in to words."

He went on to state “I actually was at the finish line one year, right there. I would've been on the other side of the street, where that [bombing] would've occurred. I would've been in plain view of where the first explosion went off… My wife, she has run in the Boston Marathon a couple of times and her sisters have run in it, too. You always know somebody in Boston that's run in it, is close, a family member, a loved one.”

The Yankees won the night’s bout with the Diamondbacks 4-2. They trailed 2-0 in the 3rd, but racked in 3 runs the following inning, after having played “Sweet Caroline.”