The online-retail leader hopes to soon have orders shipped and delivered in under half an hour with the use of a new fleet of drones. 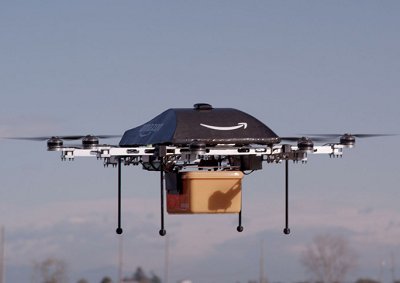 Typically when news involving drones breaks it’s about their use in military activity, or in regards to some sort of spying effort. If Amazon.com has its way, however, we could soon see drones flying overhead to drop off packages ordered through the online retailing giant.

On the eve of Cyber Monday, when the company was reasonably expected to be putting most of its focus and efforts into preparing for the web’s biggest day of sales in the US, CEO Jeff Bezos announced unveiled plans for the new “Amazon Prime Air” delivery method.

According to Bezos, the company’s new drones are capable of carrying items up to five pounds in weight (which represents 86% of all items delivered by Amazon), and could do so within 30 minutes of an order being placed. Research and Development of these drones is already nearing completion, but they likely won’t be seen in the skies for some time. Presently there are no Federal Aviation Administration regulations for the commercial use of drones, and the company will not be able to roll the program out until such guidelines are in place.

“It looks like science fiction, but it's real. From a technology point of view, we'll be ready to enter commercial operations as soon as the necessary regulations are in place,” Amazon said in a statement issued Sunday night. “We hope the FAA's rules will be in place as early as sometime in 2015. We will be ready at that time.”

The announcement comes several months after Mayor Bloomberg predicted the government could soon employ domestic drone use for purposes similar to traffic and red light cameras, saying that “we’re going into a different world, uncharted.”

There is not yet any indication as to how much it will cost to have an item shipped via Prime Air, but given Amazon’s goal of getting “packages into customers' hands in 30 minutes or less using unmanned aerial vehicles,” it would not be unreasonable to expect the program to be a fair bit more expensive than basic ground shipping. Still, the company believes its new program will be a major success, proclaiming “One day, Prime Air vehicles will be as normal as seeing mail trucks on the road today.”