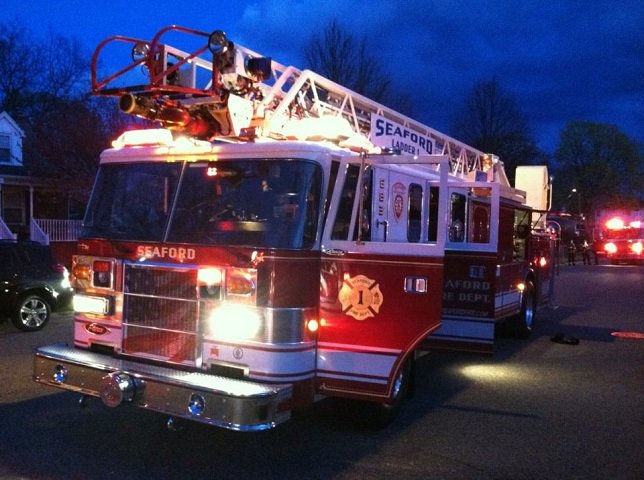 Schumer: Firefighters On LI save lives & fight fires; they shouldn’t have to fight for funds, too

Long Island, NY - December 14, 2015 - Standing with local firefighters at Seaford Fire Department, U.S. Senator Charles E. Schumer today launched a push—ahead of this week’s final Congressional budget deal—to increase grant programs for firefighters on Long Island. In recent years, these programs—which help local fire departments across Long Island purchase new equipment, protective gear and emergency vehicles, and recruit and hire new firefighters—have been cut. Fire departments across Long Island, apply for and rely upon these federal funds, which are administered through the Assistance to Firefighters Grant (AFG) and Staffing for Adequate Fire & Emergency Response (SAFER) Grant programs. Schumer made a public push and announce he is asking the Senate Appropriations Committee to include a combined $810 million for both programs in the FY 2016 appropriations bill, an increase of $130 million from FY 2015 funding. This would afford Long Island departments a better chance to secure some of these federal grant monies. Schumer argued these grant programs are extremely important to many fire departments that are already strapped for cash.

Schumer was joined by fire department leaders who will also detail the cuts they’ve experienced and the needs they currently have—needs required to maintain the public’s safety.

“Our brave firefighters on Long Island, who risk their lives every day to protect our communities, deserve to have the state-of-the-art equipment needed to do their jobs safely and effectively. Simply put, the persistent short-changing of the AFG and SAFER grant programs is unacceptable and means our local departments will not have the equipment they need,” said Schumer. “I am urging my colleagues to increase funding for these two critical programs that deliver vital resources to our fire departments across New York. I’ve fought my whole career to bring more federal resources to our volunteer and career fire departments – and I’ll be working double-time to keep our firefighters and communities safe this year.”

The AFG and SAFER grant programs provide critical assistance to local fire departments that often depend on federal funding to purchase new trucks, hoses, turnout gear, breathing equipment and more, as well as recruit and hire new firefighters in order to protect residents and emergency personnel. The AFG program in particular provides funds for firefighter training, facility upgrades, and new equipment like protective gear and emergency vehicles. The SAFER program provides funding for the recruitment and retention of volunteer firefighters, as well as the hiring of new firefighters for career departments. Schumer said fire district budgets around New York State are strapped for funding, but Congress has persistently short-changed the two grant programs. That is why he is urging Senate appropriators to increase funding to these grant programs this year. Schumer said these federal firefighter programs are a great way to provide vital funding for equipment, staffing and safety upgrades without putting a heavy burden on taxpayers. In 1999, Schumer was one of the original group of Senators who created this federal grant program for fire services for the first time.

The AFG and SAFER programs have received decreased funding since 2011. In 2011, the two programs were provided $810 million in combined funding, a total of $405 million for each program. While funding levels have fluctuated since 2011, these two programs have seen funding well below that level every year following. In 2015, the AFG and SAFER programs received a combined $680 million, a total of $340 million for each program. Schumer said this net decrease of $130 million has left cash-strapped fire departments with less federal dollars to apply for, meaning fewer will receive the critical federal funding they need to purchase equipment and recruit new firefighters. That is why Schumer is urging Senate appropriators to restore the program to the full $810 million it last received in 2011, with $405 million for the AFG program and $405 million for the SAFER program.

Schumer said the President’s proposed budget for FY 2016 requests the programs receive $670 million in federal funding, a total of $335 million for each. Schumer said that while the House and Senate appropriations bills provide slightly more, the proposed $680 million is not enough, as these two programs have experienced increased demand over the years. In fact, the two programs have received applications requesting an average of $3 billion in funding annually. This increased demand, however, has been coupled with the fact that the AFG and SAFER programs have been flat-funded over the past two years, meaning it did not even keep pace with inflation. Schumer said this means the two programs have actually seen a reduction in real dollars at a time when the cost of equipment and gear continues to rise.

Schumer said this means fewer fire departments will receive federal assistance through the AFG and SAFER programs if Congress does not restore them to previous funding levels. In fact, only 22 percent of fire departments that applied for AFG funding in 2014 received funding. Approximately 10,000 applications were submitted for AFG funding in 2014, and 2,245 awards were made. In terms of the SAFER program, 1,335 applications were submitted for funding in 2014. Just 254 awards were made, meaning only 19 percent of requests were funded through the SAFER program. Schumer said this roughly 20-80 percent success-failure rate means fewer fire departments are receiving the critical federal funds they need to purchase the basic equipment and engage in the recruitment efforts necessary to effectively respond to a range of emergency situations.

If funding continues to decline, Schumer argued it would be a devastating blow for local fire departments across NY, which will be forced to choose between waiting another year and using outdated, potentiallydangerous equipment, or purchasing equipment immediately and without federal funding, putting the burden on local taxpayers. In 2015 (FY 2014 funding round), New York State received a total of $17,715,637 in AFG funding, which constituted 172 awards. On Long Island, 10 fire departments received $1,777,481 in AFG funding.  And 5 fire departments on Long Island received $3,000,875 in SAFER funding.

A copy of Senator Schumer’s letter to Senate appropriators appears below:

As we work on funding the federal government for the remainder of the fiscal year 2016, we are contacting you in support of the Assistance to Firefighters (FIRE) grant program and the Staffing for Adequate Fire and Emergency Response (SAFER) grant program. Firefighting entities are grappling with increased equipment costs and both of these grants help firehouses nationwide defray these rising expenses. Therefore, we respectfully request that you include at least $405 million each for both the FIRE and SAFER grant programs.

The SAFER program provides much-needed funding for career and volunteer fire departments across America to hire new firefighters and recruit and retain volunteer firefighters. Two-thirds of all career and volunteer fire departments in our nation, located in both large cities and small towns, lack the sufficient personnel to adequately protect the public, and this program is critical to the thousands of fire stations nationwide that are currently understaffed. When adequately funded, SAFER improves the safety of our firefighters and the communities they serve.

Under the SAFER program, fire departments throughout the country are able to apply for federal grants to hire new firefighters. In addition, grants have been awarded to state and local organizations to recruit and retain volunteer firefighters. As you know, the SAFER program complements the very successful Assistance to Firefighters Grant program, through which the federal government provides funds for training and equipment to fire departments throughout the country. Ensuring that career and volunteer departments have adequate numbers of firefighters will allow departments to fully utilize the training and equipment funds provided through the FIRE Grant program.

Through the committee’s past efforts, we clearly demonstrated Congress’ strong bipartisan support for the FIRE grant program, as well as its understanding of the contributions this program has made to our firefighters and the communities they serve. This program has positively impacted public safety by providing nearly $7 billion since 2001 for infrared cameras, personal protective gear, hazmat detection devices, improved breathing apparatuses, and interoperable communications systems. This is the basic equipment our fire departments need to effectively respond to a range of situations. But even that level of funding has failed to keep pace with the more than $3 billion in applications submitted on average annually. The SAFER and FIRE grant programs have received flat funding for the past four years, and when accounting for inflation, the programs have experienced a reduction in real dollars at a time when costs of personnel, apparatus, and training continue to rise.

We ask and expect a lot from our firefighters as they put their lives on the line to protect others. It is imperative that we provide these brave men and women with the resources they need to safely and effectively do their job. We appreciate the challenges you face in decreasing the deficit while also making necessary investments within the Homeland Security Appropriations bill. With that said, we believe the FIRE and SAFER programs are worthwhile programs that deserve our support.

We thank you for your consideration of this request.