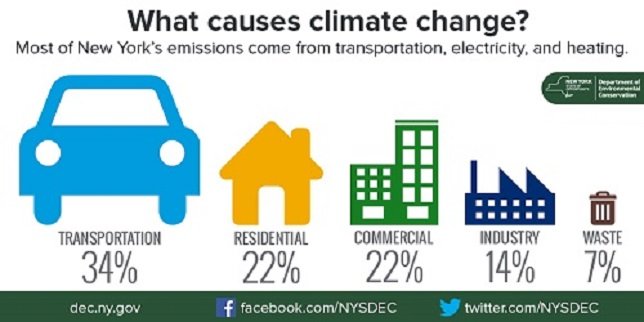 NYS DEC Acting Commissioner Basil Seggos: "The time for real solutions to address this serious issue is now, given the climate-driven impacts of more intense storms and flooding that have adversely impacted the state."

As world leaders from over 150 nations gather in Paris to craft a global solution to address climate change, it is disappointing that members of New York's Congressional delegation voted in favor of this measure, which seeks to undermine the single most important step the United States has taken to address climate change in its history. The Congressional Republicans' resolution against the Clean Power Plan is more politics as usual and ignores the resounding success of New York and other states in reducing carbon pollution while supporting economic growth.

Under Governor Cuomo's leadership, New York is on track to exceed the goals of the Clean Power Plan. The Regional Greenhouse Gas Initiative demonstrates how successful the cap and trade approach is to reducing carbon emissions while creating jobs, lowering energy bills and preserving the reliability of the electricity system.

New York is confident President Obama will veto this short-sighted measure that undermines the steps New York has taken to address climate change and create a clean energy future.

The time for real solutions to address this serious issue is now, given the climate-driven impacts of more intense storms and flooding that have adversely impacted the state. The science has spoken and action to address climate change has bipartisan support. It's time for policy makers to act and protect our citizens from our uncertain climate future that will bring more heat waves, extreme storms, sea level rise, and the threat of destructive floods. The people of New York expect more out of the Republican members of the New York Congressional Delegation who voted to disapprove of the Clean Power Plan.