Officials: Shaquawn Mason, 25 and Susline Santana, 22, were caught with cocaine, crack, heroin, crystal meth, handguns, and over $10,000 in cash.

NCPD report the arrest of Shaquawn Mason, 25 and Susline Santana, 22, both of Ronkonkoma, for a narcotics related case on Thursday, November 30.

Ronkonkoma, NY - December 1, 2017 - Major Case Bureau detectives from the Narcotics Vice Bureau report the arrest of two individuals from Ronkonkoma (Suffolk County) for a narcotics related case on Thursday, November 30, 2017 at 5:30 am in Ronkonkoma.
According to detectives, an investigation into a “Long Island” narcotics trafficking organization, that was distributing drugs including, heroin, cocaine and crystal methamphetamine, was conducted. 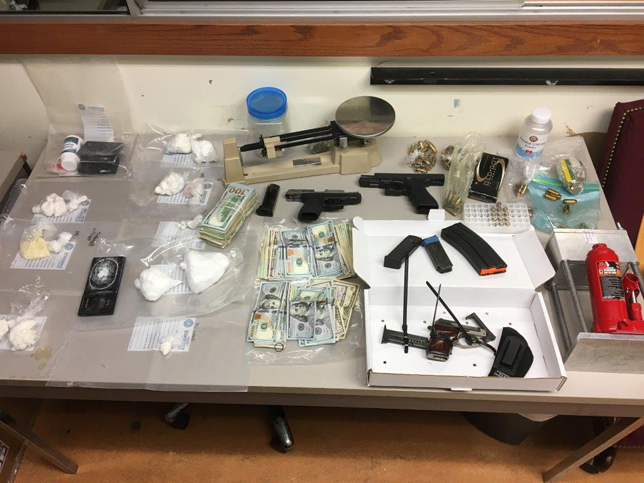 Evidence seized during the arrest of Shaquawn Mason, 25 and Susline Santana, 22, both of Ronkonkoma. Photo Credit: NCPD
During the course of the investigation, detectives executed a search warrant and with the assistance of Suffolk County Police Department- Emergency Service Unit entered a residence on Easton Street where they found and recovered 320 grams of cocaine, 130 grams of crack cocaine, 75 grams of heroin, 23 grams of crystal methamphetamine, packaging materials, scales, cutting agents, three loaded handguns, one high capacity ammunition magazine, numerous rounds of ammunition and over $10,000 in cash.
Placed under arrest at the scene was Shaquawn Mason, 25 and Susline Santana, 22, both from the aforementioned address.
Mason and Santana are both charged with three (3) counts of Criminal Possession of a Controlled Substance 3rd Degree, Criminal Possession of a Weapon 3rd Degree, Criminal Possession of Stolen Property 4th Degree and three (3) counts of Criminal Possession of a Weapon 4th Degree. Mason was additionally charged with Conspiracy 2nd Degree.
Both defendants will be arraigned in First District Court, Hempstead on 12/1/2017.
A criminal charge is an accusation. A defendant is presumed innocent until and unless proven guilty.