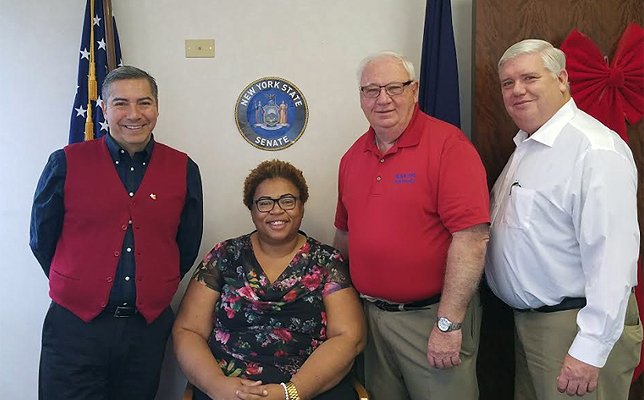 Long Island, NY - November 30, 2017 - Senator John Brooks reaffirmed his support of local community-based groups and their efforts to end the AIDS/HIV epidemic as he met with National Black Leadership Commission on AIDS (NBLCA) representatives today.
Senator Brooks met with Johnny Mora, NBLCA Program Coordinator & LI Regional Director and Melissa Baker, NBLCA Vice President of Administration, to reaffirm his support of local community-based groups and their efforts to end the epidemic. They discussed reaching that goal by continuing and expanding education efforts to prevent exposure.
Public health advocates have already seen progress in ending the epidemic following steps taken by NYS in providing high quality treatment and support services to individuals infected with HIV/AIDS. Senator Brooks said, “New York State is leading the fight against HIV and AIDS. The key to ending the epidemic is through prevention education, increasing access to testing and breaking down barriers to treatment.”
In recognition of World AIDS Day, December 1, everyone is encouraged to get tested for HIV, the virus that causes AIDS. In the United States, about 1 in 7 people who have HIV don’t know it. The only way to know for sure whether or not one has HIV is to get tested. People can have HIV and still feel healthy.
To learn more about HIV/AIDS or obtain confidential testing, contact the NYS Dept. of Health hotline at 1-800-541-AIDS.