Governor Cuomo kicked off the Enough is Enough awareness campaign to highlight the State’s new law to combat sexual violence on college campuses, which takes effect this semester. 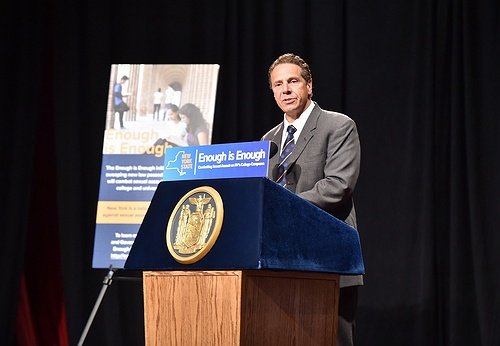 Albany, NY - September 2, 2015 - Governor Cuomo kicked off the Enough is Enough awareness campaign to highlight the State’s new law to combat sexual violence on college campuses, which takes effect this semester. As part of the campaign, Lieutenant Governor Kathy Hochul and Special Advisor Christine Quinn will be visiting campuses statewide to meet with students, faculty and staff and discuss the new law, and distribute informational cards that promote facts about the initiative, as well as students’ rights and protections under the law.

The Governor also announced that the State Police’s new Sexual Assault Victims Unit is now open to provide investigative support and assistance to victims of sexual violence, as well as training and law enforcement aid for schools and local police departments statewide in line with the new law. The Governor made these announcements earlier today at New York University’s Eisner and Lubin Auditorium in Manhattan.

"New York is the progressive capital of the nation, and we are proud to take on tough issues like changing the culture and mindset surrounding sexual violence on college campuses. That is why this law is so important, and every freshman or returning student should know the rules of behavior have changed," Governor Cuomo said. "These situations are not just a violation of school policy or ethics: they are crimes, and every student should know they have more rights than before. Our message is clear: Enough is Enough, and New York will not tolerate sexual assault on our college campuses."

In the coming days and weeks, Lieutenant Governor Hochul and Special Advisor Quinn will travel to colleges and universities across the state to meet with students, faculty and staff who are all affected by the law. Download a copy of the informational card they will be distributing as part of this tour.

Lieutenant Governor Kathy Hochul said, "As students and faculty return to college campuses this fall, now is the time to begin promoting our State’s newest law that is intended to protect our children from the scourge of sexual assault. This year, Governor Cuomo led the campaign to enact the strongest, most comprehensive legislation through the Enough is Enough campaign. Now begins the process of enforcing these measures. With the assistance of our State Police and by utilizing new technology and cutting edge tools, we are sending a powerful message that a new day is finally upon us. I look forward to crisscrossing every corner of our State to bring this new law directly to our classrooms."

Special Advisor Christine Quinn said, "Under Governor Cuomo, New York State is leading the fight against sexual assault and rape on college campuses – and I am proud to say that our state now has the toughest law in the country relating to campus rape. Our challenge now is to make sure that students know their rights and schools know what is expected of them. That's what this awareness campaign is all about, and I look forward to meeting with students and administrators across the state in order to help bring an end to the culture of campus sexual violence."

Assemblywoman Deborah Glick said, "This awareness campaign represents the culmination of months and months of hard work from a tremendous coalition of advocates who joined the Governor and I to make this law a reality. With this new law taking effect this semester, students at colleges and universities statewide will benefit from a clear set of policies to combat sexual assault and address these crimes when they do occur. Now it’s up to all of us to spread the word – and that is what today is about."

The State Police Sexual Assault Victims Unit consists of Senior Investigators assigned to all Troops statewide who will work closely with advocates, students, sexual assault survivors, colleges, universities and local police. Senior Investigators assigned to the unit will visit each college or university in their Troop, creating a dialogue with the school administration, campus police and student groups to help evaluate specific needs.

They will utilize Sexual Assault Nurse Examiners as consultants to help ensure that evidence is properly documented and handled, and the unit will also work with local rape crisis centers that provide services and resources to victims. The New York State Police will also maintain its dedicated phone line for reporting sexual assaults on college and university campuses: 1-844-845-7269

The unit will assist with campus crimes of sexual violence that are reported to the State Police and will provide law enforcement support to college and university police, as well as local police departments, on their investigations of campus sexual assault cases. In addition, the unit will develop and conduct training for local and campus police departments as well as campus communities, with a focus on the skills and techniques that are required when first responding to a reported sexual assault.

New York State Police Superintendent Joseph A. D’Amico said, “By creating this new unit, we will strengthen relationships with campus communities and provide dedicated resources with the goal of bringing justice to students who are victimized. We want victims to know that they are not alone. The State Police and our local law enforcement partners are here to help.”

The new law supporting Governor Cuomo’s Enough is Enough initiative requires all colleges to adopt a set of comprehensive procedures and guidelines, including a uniform definition of affirmative consent, a statewide amnesty policy, and expanded access to law enforcement to ensure the safety of all students attending colleges in New York State.

Because the law is the first of its kind in the nation, raising awareness is critically important to ensuring the public fully understands its policies. This awareness tour complements reach-out efforts by senior members of the Governor’s administration during the “Enough is Enough” campaign this spring, which brought dozens of listening sessions, roundtable discussions and rallies to colleges and universities across New York. Learn more about the Governor’s Enough is Enough initiative.

The Governor also highlighted two new SUNY resources that support victims of sexual violence. The first is a mobile website that lists all of the resources and contact information available by SUNY campus or zip code, including services and help organizations on-campus, off-campus, and statewide. The second tool is multi-lingual and aimed toward immigrants, which will allow colleges and universities to share critical information with students in their native language. Both tools can be customized for use by states and colleges nationally at no cost, and they can be found easily by typing “SUNY SAVR” or any combination of “SUNY Sexual Assault & Violence Resources” into the Google search engine.

“In the immediate wake of a trauma, it is imperative that colleges and universities provide students with accurate, comprehensive information about the support available to them both on- and- off-campus,” said SUNY Chancellor Nancy Zimpher. “Both of these new SUNY resources are the first of their kind in the country, and while we hope they are rarely needed, we are proud to make them available not only for our students but for all victims of violence in New York State.”