On the final weekend of the season for Youth and Junior World Cup racing, the USA Luge doubles team of Dana Kellogg and Duncan Segger capped a consistent first season together, by taking the overall ... 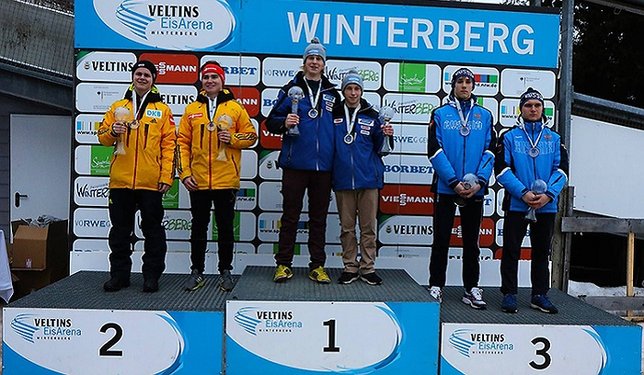 Winterberg, Germany - February 21, 2017 - On the final weekend of the season for Youth and Junior World Cup racing, the USA Luge doubles team of Dana Kellogg and Duncan Segger capped a consistent first season together, by taking the overall championship in the youth division.

Teammate Ashley Farquharson, of Park City, Utah, took fifth on the final day and collected the youth tour’s overall bronze medal. She secured her final rank on the course in Hochsauerland that has recorded some of the fastest times in luge history.

“The youth and junior circuits are grueling with the travel from week to week, and learning new tracks,” said Fred Zimny, USA Luge Junior National Team coach. “That they hung in there all year long and fought to the end shows their resilience. Unlike many of our European competition, our kids can’t pack up after racing and go home for a few days. We’re away from home for months at a time, but our team persevered.”

In a six-race season, the five best results were counted. Thus, Saturday’s seventh place doubles result by Kellogg and Segger on the speedy track in Winterberg, Germany was a throwaway.

In a season highlighted by two silver medals and a pair of bronze medals, Kellogg, of Chesterfield, Mass., and Segger, of Lake Placid, N.Y., totaled 360 Youth World Cup points and a 15-point edge over Germany’s Hendrik Seibert and Calvin Luke Meister.

Farquharson was in a tightly-contested battle for second and third overall. She started her season with two bronze medals in Calgary, then added a seventh place and two fifth place efforts to close the campaign.

Farquharson was just five points from second place racer Carolyn Maxwell, of Canada, in the overall standings, and only one point ahead of fourth place Evita Koehne, of Germany.

Grace Weinberg, of Pittsfield, Vt., placed 22nd on the season.

USA Luge was seventh in the season-ending standings in the team competition.

Among the ladies who also only raced in December, Katherine Bishop, of Carlisle, Mass., finished 21st; with Elana Morrison, of Muskegon, Mich., 22nd.

These youngsters will now return home and prepare for their Norton National Championships and seeding races at Mount Van Hoevenberg in Lake Placid. The youth races take place March 3-4, followed by the older juniors on March 11-12.