Maybe they are raining on your end-of-the-world parade, but NASA scientists are squashing theories that Dec. 21, 2012 will bring the end of the world.

Folks, if you’re reading this article on the morning of Dec. 21, 2012, don’t quit your day jobs!  And, you should probably finish that holiday shopping you were hoping to avoid this year.

NASA has created a page on it’s official website to tackle the recent string of end of the world myths.  This time, the Mayans are the culprits, though not entirely.
Here’s what happened:
A catastrophe, linked to the “supposed” planet Nibiru*, discovered by the Sumerians, which some claim is heading toward Earth was predicted for today.  The impact was originally slated for May 2003, but when the world did not end at that time, end-of-the-world theorists pushed the date back to the last date recorded on the Mayan calendar, winter solstice of 2012.
NASA offers a pretty witty response to those who fear that because the Mayans chose the winter solstice to stop recording future dates:  “Just as the calendar you have on your kitchen wall does not cease to exist after December 31, the Mayan calendar does not cease to exist on December 21, 2012.” 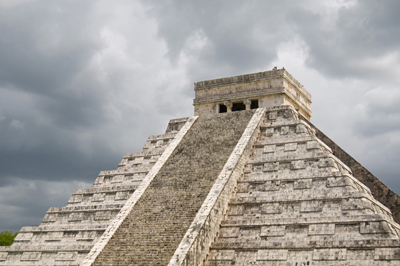 The Mayans were among the most advanced pre-industrial civilizations in the world, and the only people throughout the pre-Columbian Americas to fully develop a written language.  Along with this advanced communication system, the Mayans are known for their advanced architecture, mathematics and astronomy.  And of course, their calendar which famously ends on December 21, 2012.
The Mayans ultimately went into decline between the 8th and 9th century, though no universally accepted theories explain this collapse.  Possible explanations include non-ecological theories, such as overpopulation, foreign invasion, revolt, or interruptions to key trade routes.  Others suggest natural disaster, epidemic disease, and even climate change.  The Spanish conquest of the Yucatan peninsula, the traditional home of the Maya people began in the early 16th century, but the last Mayan stronghold, the Itza capital of Tayasal, held out until 1697.  The Maya people never disappeared, and millions of people still speak Mayan languages and continue to maintain a distinctive set of traditions today.
NASA goes on to squash theories that Earth will be hit by a meteor before year’s end. No giant solar storms will destroy the Sun or Earth.  There are no upcoming planetary alignments that will have any destructive or disruptive impacts to life on Earth.  And, a polar shift, or a reversal of Earth’s rotation, is simply impossible.
*According to NASA, Nibiru is an internet hoax.  So, again, nothing to worry about!  But, that doesn’t mean you shouldn’t have a party!
But, we can’t be sure at what time on Dec. 21st the Mayans would have had in mind for a possible end of the world, so we can’t yet throw it in anyone’s faces that they still had to go to work on Friday.  For true believers, midnight is the only thing that will entirely squash claims that we have arrived at our last day.
Share your thoughts on this article by posting a comment below, or by visiting our Long Island Living discussion forum.