Senator Brooks, a volunteer firefighter and former Chief of the Seaford Fire Department, is a co-sponsor of the bill that Governor Andrew Cuomo signed into law. 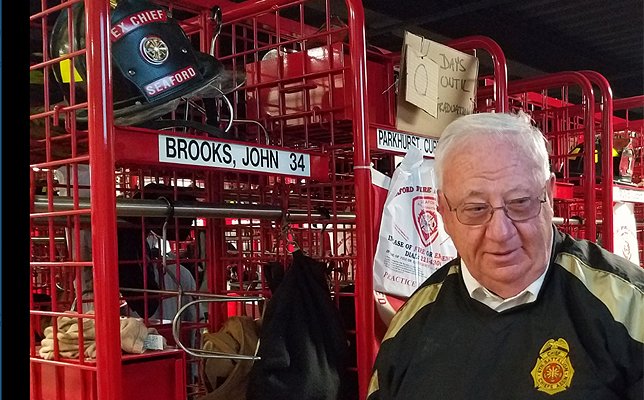 Long Island, NY - October 24, 2017 - Senator John E. Brooks said, “Today, I join New York State’s 110,000 volunteer firefighters in thanking Governor Cuomo for signing legislation that I have been fighting for that will provide sorely-needed presumptive cancer coverage to all of our heroes. Going forward from today, New York will do the right thing in ensuring that our volunteer firefighters have coverage, even as rates and types of firefighter cancer continue to rise. Volunteer firefighters sacrifice their time, risk their lives, and too frequently, their safety and health. They are there when we most need them, and now we can honestly say we are there for them when they need us.”
Senator Brooks, a volunteer firefighter and former Chief of the Seaford Fire Department is a co-sponsor of the bill S. 1411B / A. 0711B that Governor Andrew Cuomo signed into law today. This legislation provides presumptive “gap” coverage for volunteer firefighters diagnosed with certain types of cancer, and it unanimously passed both chambers of the State Legislature earlier this session.
Firefighters have a higher incidence of getting certain cancers than the general public. Currently, only paid firefighters are afforded additional benefits in the event of a cancer diagnosis. The cost of treating cancer can be extremely high, as it includes co-pays, travel expenses to reach treatment centers and lost wages from not being able to work.
The legislation was crafted to minimize the cost of this coverage for counties, towns, villages, and fire districts, while still providing the help that New York’s volunteers need. The cost of this coverage for volunteer firefighters is minimal compared to the $3 billion they save NYS taxpayers each year.
In New York State, paid and volunteer firefighters respond to virtually identical incidents and fires, but only paid firefighters are protected in the event of a cancer diagnosis. The signing of this legislation now provides volunteers a much-needed benefit that career firefighters already had.
The provisions of the bill include: