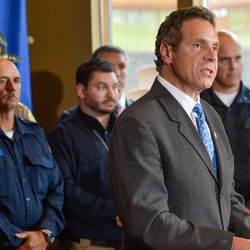 Governor Cuomo announced appropriate precautions are being taken to prevent similar tragedies from taking place in the state of New York following the shooting at a Planned Parenthood clinic in Colorado Springs.

“Friday’s shooting at a Planned Parenthood clinic was a senseless act of violence that has left us shocked and heartbroken. While we are still learning more about what led to this horrendous attack in Colorado, we are taking appropriate precautions and doing everything possible to prevent similar tragedies from taking place in our state,” said Governor Cuomo. “The State Police will be patrolling clinics across New York on Monday, and our administration is working closely with dedicated Planned Parenthood staff and our local partners to ensure the safety of these health centers throughout the state. My thoughts and prayers are with all who were injured in Friday’s attack, as well as the loved ones of those who died in that terrible tragedy.”

Lauren Tobias President and CEO of Family Planning Advocates and Planned Parenthood Advocates of New York State, said: “Our thoughts are with all who were impacted by yesterday’s events; especially the families and friends who lost loved ones, those who were injured and the brave law enforcement agencies and Planned Parenthood staff who handled this tragedy with strength and professionalism. The information regarding the gunman's motive remains unknown as does whether Planned Parenthood was targeted deliberately. But unfortunately there is a history of people bringing violence to health centers in the past and so an incident such as this underscores the need for vigilance to ensure that patients and the staff that provide services are safe at all health centers. We will work with the Governor’s office, local law enforcement and Planned Parenthood affiliates to make sure health centers in New York can continue to provide safe and accessible high quality health care.”

Beginning Monday, State Police will be engaging with staff at Planned Parenthood clinics around the state for discussions about security. The State Police will also be increasing patrols of clinics in coordination with local law enforcement.

Clinics across New York State are closed on Sunday.