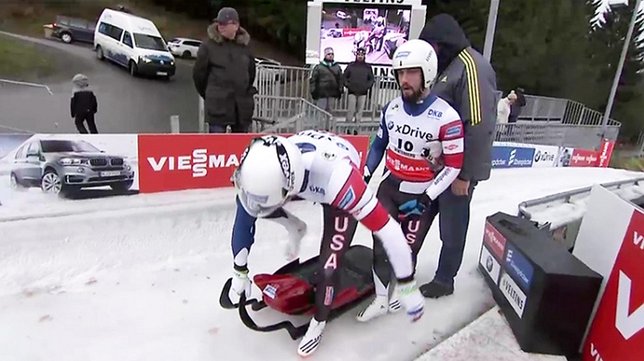 Winterberg, Germany - November 27, 2016 - With weather changing from warm to cold to warm again, Matt Mortensen and Jayson Terdiman of the United States drove their doubles sled to a fourth place finish Sunday in a BMW Sprint World Cup luge race.

This occurred a day after their sixth place result in Viessmann World Cup doubles, as the team embarks on its third season together.

The sprint is a single-heat race featuring the top 15 from each discipline. It is termed a sprint, or flying start, into the timing mechanism which is located 100 meters below the handles, and significantly lower than traditional World Cup races. The format allows the luge athletes to build momentum before the clock starts.

“We were knocking on the door this weekend,” said Mortensen, front driver from Huntington Station, N.Y. “That’s good news for us. We’re picking up right where we left off. So we’re right there in fourth place on a German track in a sprint cup, which is kind of our signature event. We really gain a lot of speed going down the track. So without that start hindering our performance, it really puts us in medal contention.”

Seeking more speed was also significant for the team that went to the last Winter Games on different doubles sleds. They are currently ranked fifth in the overall World Cup standings, which mirrors their final rank of last season.

“This is a flowing track,” remarked Terdiman, the back driver hailing from Berwick, Pa. “We’re trying to build pressure (in the corners) all the way down. Today especially, I felt like Matt and I pushed ourselves to picking up more speed going down the course itself and it really helped us get the great result today.”

“All fall, I’ve been playing around with different equipment,” said the Remsen, N.Y. native. “I’ve never really done that in my career. So it was a little bit different. I was trying to dial some stuff in. I haven’t really felt super comfortable all week. Normally I can dial my lines in pretty well and haven’t been able to do that. So I tried something a little different today. It was definitely better.

“I still didn’t have great runs. There’s still a decent amount of time in there (to be gained). It was my best run out of all my race runs but there’s still some work to do.”

German doubles teams swept the sprint podium in a race where the medal winners were separated by 0.06 of a second. Toni Eggert and Sascha Benecken found time in the long, uphill 14th and final curve to overcome Tobias Wendl and Tobias Arlt as well as Robin Geueke and David Gamm.

The winners sprinted home in 31.347 seconds, merely 0.005 of a second ahead of Sochi Olympic gold medalists Wendl and Arlt. Geueke and Gamm were next in 31.402. Mortensen and Terdiman clocked 31.469.

Jake Hyrns, of Muskegon, Mich., and Anthony Espinoza, of Park City, Utah, finished 13th in 31.843. Justin Krewson, of Eastport, N.Y., and Andrew Sherk, of Fort Washington, Pa., did not qualify in the Nations Cup race on Friday.

Men’s singles kicked off the second day in Winterberg, one that had medal-winning prospects for Tucker West and USA Luge in the singles race. Sitting in second place late in the opening heat, the Ridgefield, Conn. Olympian was disqualified for being overweight.

That left two teammates in the field. Two-time Olympian Chris Mazdzer, of Saranac Lake, N.Y., second here last February in rain and wind, landed in 11th place, 0.478 of a second from first-time World Cup winner Johannes Ludwig of Germany. Taylor Morris, of South Jordan, Utah, was 20th, 0.630 from the top. Jonny Gustafson, of Massena, N.Y., a junior national team member, did not qualify on Friday for singles, thus losing the chance to compete in the sprint.

Defending world and World Cup champion Felix Loch was fourth, 0.05 from the podium, but he made amends for that by winning the BMW Sprint Cup later in the day.