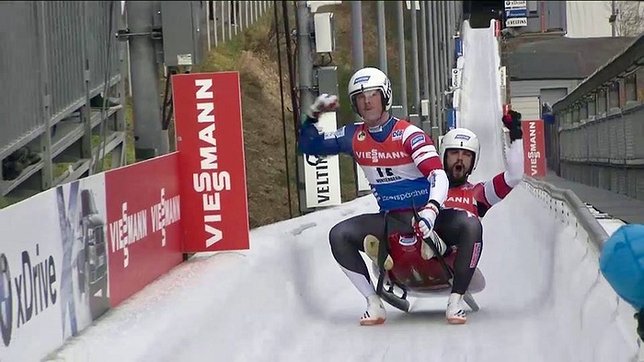 Matt Mortensen and Jayson Terdiman finish sixth at the first World Cup of the 2016-17 season, off to a strong start!

“We had a plan all week to make sure we were good and comfortable on the track. We really accomplished that day one,” said Terdiman, a Sochi Olympian from Berwick, Pa. “In the first three runs, the labyrinth was being a little tricky for us, but we figured it out by the third run of training. From there on, it was (a matter of) becoming more relaxed because we looked at the weather forecast and knew it was going to get colder and the ice was going to get faster. We knew it would be very important to stay relaxed.”

Earlier, Emily Sweeney paced the U.S. team with a ninth place finish in singles followed by Summer Britcher 11th and Olympic bronze medalist Erin Hamlin 14th. The latter racer got in Sunday’s BMW Sprint race just under the top 15 cut line. Raychel Germaine qualified in the Nations Cup race Friday and wound up 21st, but will sit out the sprint.

Jake Hyrns and Anthony Espinoza also entered the race via Nations Cup qualifying and took 15th place. They displayed two of the quickest starts in the field. Justin Krewson, of Eastport, N.Y., and Andrew Sherk, of Fort Washington, Pa., did not advance from the Nations Cup.

After mild weather during the week, Germany flexed its collective muscle on a comfortable, colder day in Hochsauerland, winning all six medals in the two events. The results of a year ago, which showed great parity and excitement in singles, may have also awoken the luge giants to begin the new campaign with a message to all comers.

The home team’s Toni Eggert and Sascha Benecken, in winning for the 17th time, also produced a track record and topped the leaderboard, with Robin Gueke and David Gamm second. The most dominant team of recent seasons, Tobias Wendl and Tobias Arlt, were second after the first leg but broke a start strap to begin their final run. The Sochi Olympic gold medal winners salvaged the race with a bronze medal when disaster lurked around every turn.

Eggert and Benecken, with the two fastest runs of the contest, clocked 42.962 and 42.943 seconds, for a 1 minute, 25.905 second total. Gueke and Gamm were next in 1:26.287. It was their career-best result after a fourth place effort last season in Lake Placid. Wendl and Arlt took third in 1:26.426. Latvian brothers Andris and Juris Sics, Olympic silver and bronze medalists, were fourth.

“It was a solid performance on both of our behalves,” stated 2014 Olympian Mortensen, of Huntington Station, N.Y. “We were tinkering around with a couple of things last night trying to make the sled fit just a little bit better for us. So we went through a little bit of apprehension wondering if we were going to be able to lay down into the sled properly. Everything went well and yet it’s a very good start to the season for us. We’re looking forward to the sprint race tomorrow.”

Hyrns, of Muskegon, Mich., and Espinoza, of Park City, Utah were timed in 1:27.117. Their 15th place result also made the cut for Sunday’s Sprint race and the additional World Cup points that will be distributed.

Geisenberger was the final starter in each heat giving proof to the quality of the ice conditions throughout the women’s competition that began further up the Winterberg layout from the doubles departure. Geisenberger’s times were 55.401 and 55.323 for a combined 1:50.724, good enough for her 34th career victory. In what could be the race within the World Cup chase, she needs three wins to overtake compatriots Huefner and the retired Silke Otto.

Sweeney led a U.S. women’s group that has had physical issues coming into the season. The Suffield, Conn. athlete, typically quick from the start handles, did not have that advantage on Winterberg’s long, shallow start ramp as a result of her recovery from late summer wrist surgery. Nevertheless, her second heat was fifth best, leading to a final time of 1:51.895.

Britcher, another 2014 Olympian, has been nursing a shoulder injury in recent weeks. The Glen Rock, Pa. resident stood sixth at the intermission, before taking 11th in 1:51.959.

Sunday’s activity will conclude the Winterberg week and begins at 3:45 AM ET with men’s singles, followed by the sprint event. All races will be streamed live this season. For more information please log on here