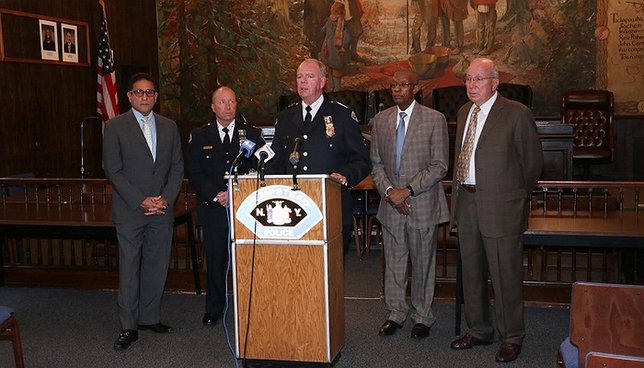 Photo by: Office of the Mayor of the Village of Hempstead.

Hempstead, NY - November 15, 2016 - The Village of Hempstead Police Department announced today a brand-new, uniformed gang task force to combat gang-related crimes in the Village. The new force will greatly expand on existing gang intelligence assets and policing capacities to advance public safety. The introduction of the uniformed gang task force is part of Village of Hempstead Mayor Wayne J. Hall’s tough stance on crime, dedication to protecting Village residents, and his promotion of safety as the foremost Village priority.

“Combatting criminal gang activity is essential to public safety,” said District Attorney Madeline Singas. “I applaud Mayor Hall and Chief McGowan for prioritizing this fight through the creation of a task force that will focus on gang members who bring violence, guns and drugs into our communities.  We will continue to develop information and strategies with the Village of Hempstead Police Department to put an end to these criminal enterprises.”

“All Village residents should reach out to the police if they experience or are aware of criminal gang activity,” said Village of Hempstead Deputy Mayor Luis Figueroa. “Reporting suspected criminal activity is completely confidential and can save lives.”

For more information, please call the Incorporated Village of Hempstead at 516.489.3400 or visit the website at www.villageofhempstead.org