Senator Michael Venditto is once again standing with community members and speaking on their behalf in opposition to the opening of an adult entertainment club in Wantagh. 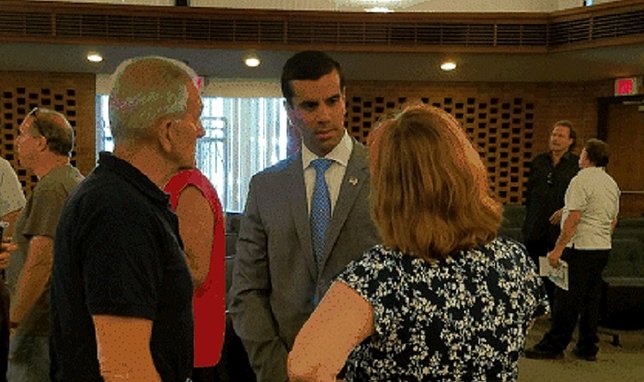 Senator Venditto speaking with Wantagh residents before the Hempstead Zoning Board of Appeals Meeting.

Wantagh, NY - September 2, 2016 - Senator Michael Venditto (R-Massapequa) is once again standing with community members and speaking on their behalf in opposition to the opening of an adult entertainment club in Wantagh.  Owner, Billy Dean, and his partner Rori Gordon, have refiled an application with the Town of Hempstead to open an adult establishment at the corner of Sunrise Highway and Oakland Avenue. The property is located in the heart of a family-oriented neighborhood and approximately two-fifths of a mile away from Wantagh Elementary school.

Billy Dean and his business partner attempted to open the facility in 2009, but due to community outrage they were denied.  Thanks in part to Senator Venditto and other local representatives the project was rejected by the Hempstead Zoning Board of Appeals. The board’s decision was upheld by the New York State Appellate Division in 2014 and affirmed by the highest court in New York State, the New York State Court of Appeals.

Senator Venditto said, “One of the major roles of an elected official is to be a representative of the community at large and protect its interests. It is for that reason why I stood with the residents of Wantagh at the Hempstead Zoning Board of Appeals Meeting to voice our opposition to the potential establishment of a Billy Dean adult entertainment facility located on Sunrise Highway in Wantagh.”

“This type of business brings nothing positive to the community and it would only hurt the residents of the community by potentially bringing down their property values. I urge any and all residents in the surrounding areas to make sure your voices are heard on October 13th at Hempstead Town Hall when the Board will meet again to discuss the issue. I also strongly urge the Board to reject the application and keep Wantagh a safe community,” said Senator Venditto

For more information about the October 13th hearing please contact Senator Venditto’s office at (516) 882-0630. To sign the petition expressing your opposition to the Billy Dean establishment please visit here.