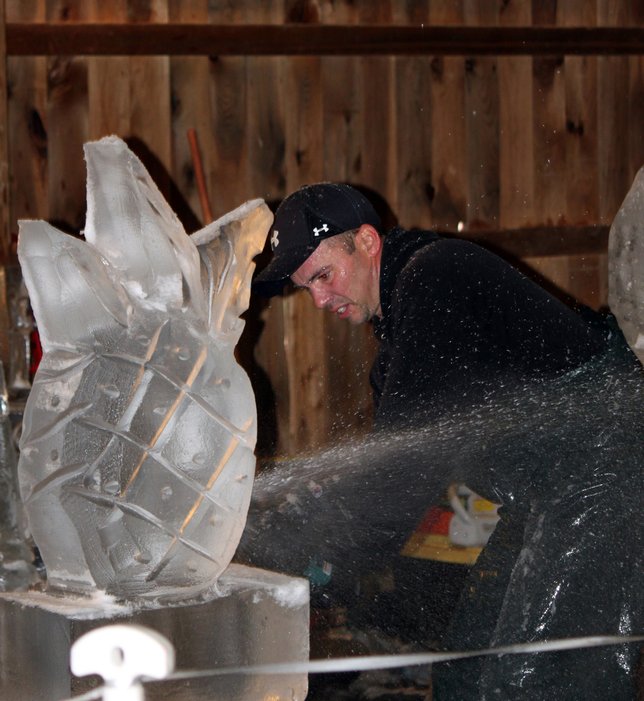 For nearly a year leading up to his world-record breaking attempt, Daly, who is also the U.S. National Speed Ice Carving champion, worked on the designs and logistics of the sculptures which were approved in advance by Guinness. In preparation for the record-breaking attempt, Daly changed his diet, increased his exercise regimen and woke up regularly at 3 am to practice ice carving at his business, Ice Melodies, Inc.

The sculptures, made from 20,000 pounds of ice, included themes of clothing, art, religion, food, buildings, corporate logos and several Halloween and Christmas-themed pieces. His goal was to complete each ice sculpture within three minutes and 30 seconds followed by a 10-second break between each ice sculpture. He finished with an average time of two minutes and 52 seconds for each completed ice sculpture. The 61st and final ice block was carved into a king’s crown, to signify the beginning of his reign as the world ice carving record holder.

“Thirteen years ago as a culinary student and first-time ice carver, I never would have thought I would be standing with a world record certificate,” said Daly. “As I tell my students, the hard work that you put in today will reward you down the road; and culinary just might be that avenue.”

As the Guinness World Record holder and the U.S. National Speed Ice Carving champion, Daly has reached the pinnacle of ice carving. In the future he plans on continuing his focus on equipping his students for the world of culinary arts, growing his ice carving business and possibly taking aim at international competitions.

About the Culinary Arts program at William Floyd High School
The William Floyd High School Culinary Arts program, one of five course offerings in the William Floyd School District Career and Technical Education (CTE) program, offers a two-year course of study on the instruction and practical experience in the skills and theory necessary to be employed in a variety of food service professions. Students learn culinary mathematics, menu planning, food science, health and safety procedures, food identification and purchasing. The district’s fully equipped kitchen is equivalent to those found in restaurants around the world. Other offerings in the district’s CTE program include Carpentry, Cosmetology, Transportation Technologies (automotive) and Medical Assisting.